A world traveler passes through 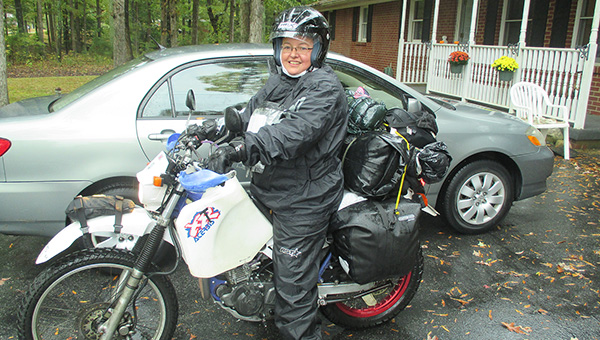 Loretta Vince had this photo taken right before she began her cross country journey on Oct. 7. The London, England, native is crossing the United States, and stopping in Albert Lea, on her motorcycle before heading to Australia. — Submitted

A London, England, woman has stopped in Albert Lea for a week while touring the nation on her Yamaha motorcycle.

Loretta Vince, 55, is taking a break from her round-the-world trip to visit her friend Lisa Ehlers, an Albert Lea native. Ehlers graduated from Albert Lea High School in 1989 and has lived in England since 1995. The two women are visiting Ehlers’ family, including sister Suzan Hayson, in Albert Lea. 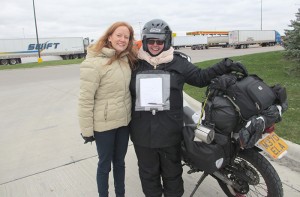 Vince is actually on her way to Australia, but she’s taking about six months to get there. Though she is not afraid of planes, Vince said she much prefers not to fly.

And the trip by plane is about 24 hours with stops along the way. So she had to find another way halfway around the world to see her friends in Australia.

The journey started on Sept. 2 when Vince boarded the Queen Mary 2 from Southampton, England, for an eight-day ocean liner cruise to New York City. She knew she wanted to travel via motorcycle around the U.S., so she shipped her 1994 Yamaha XT 225 Serow to Baltimore.

When she arrived in the U.S. she stayed with cousins on the East Coast and was a bit disappointed that she couldn’t see some landmarks because of the federal government shutdown. Then she started her motorcycle journey, which took her through Michigan and Wisconsin before arriving in Albert Lea.

Vince doesn’t have a route planned, other than that she needs to be in Los Angeles before February. There are only two passenger liners per year leaving from the West Coast, so she knows she wants to catch one. On Feb. 2, she will board another ocean liner that will travel via Bora Bora, Fiji and New Zealand before stopping in Sydney, Australia, a total of 22 days after she boards.

She much prefers it that way, and she has a few stops she would like to see. She had hoped to see a national park in Montana, but now she fears it will be too cold to visit on the motorcycle. She thinks she may head south to see the Southwest before traveling to California and hopefully visiting Sequoia National Forest.

Vince plans to not use any interstate highways, and so far she has been able to avoid them. She’s not using GPS, either. She borrowed a 1998 Rand McNally road atlas of the United States from her brother and is using that as her guide across the nation.

“The only thing I know I don’t want to do is Route 66 — it’s too predictable,” Vince said.

Vince said the whole idea started for the trip when her friend from Australia visited her a few years ago. Knowing that it’s an expensive trip, she didn’t want to ask the friends to visit again and thought she should head to Australia to see them. And not enjoying flying, she found a way to cross the world and see it along the way.

Vince said she was recently laid off from her job as a horticulturist for a charity so it seemed like the right time. She sold her flat in England, bought another one and rented it out to help fund the trip. She’s hoping not to spend more than 20,000 pounds, which roughly equals $30,000.

She’s been riding motorcycle since age 20. And since she has her license in England, she can legally drive through the U.S. Vince said she knows she could see some sights in America in much less time, but she wants to journey the country, meet people and experience America the way a short-term tourist can’t.

“It’s not about arriving in L.A. as soon as possible,” Vince said.

She thinks she will spend about six months in Australia, before returning home to England. How will she get back home? She’s not sure yet, but there is lots of time to figure that out.