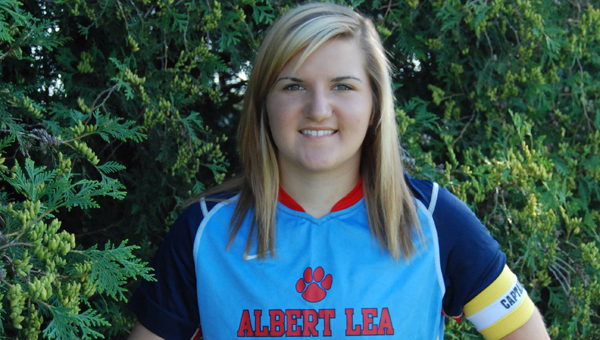 Hanson is a senior and a two-year captain. She has played soccer since age 4 and has played on varsity since seventh grade — the last time Albert Lea went to the MSHSL State Tournament. She had a comeback this season this year, because she tore her ACL and MCL in a preseason scrimmage in the fall of her junior year. Since then, she has worked hard to regain her strength, speed and endurance so she could help lead her team to the Section 2A finals against Mankato West on Friday. She found out three weeks ago that she has been playing the current high school season without a functioning ACL. Her reconstruction graft has totally deteriorated and where her ACL should be, there is only scar tissue and fluid. That has not stopped Hanson from playing. She is scheduled to have her second reconstruction surgery the first week of November.

Hanson hopes to continue her soccer career after high school when she attends Wayne State College in Nebraska.