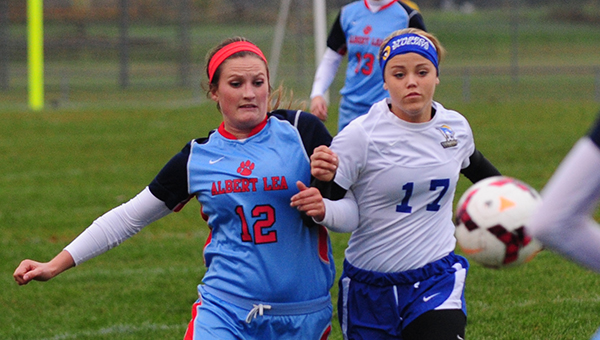 Sarah Savelkoul of Albert Lea tries to get position to get the ball against Waseca/New Richland-Hartland-Ellendale-Geneva/Janesville-Waldorf-Pemberton’s Elizabeth Strand. Savelkoul scored the Tigers’ third goal of the game in a 3-1 win over the Bluejays in the Section 2A semifinals at Waseca. — Micah Bader/Albert Lea Tribune

The Albert Lea girls’ soccer team qualified for the section finals for the fifth time in 10 years.

At the Section 2A semifinals at Waseca on Tuesday, No. 3-seed Albert Lea gave No. 2-seed Waseca/New Richland-Hartland-Ellenadle-Geneva/Janesville-Waldorf-Pemberton — a team with an overall record of 13-0-3 — its first loss of the year. 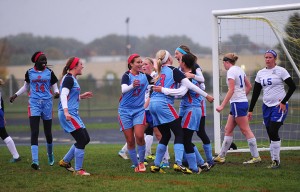 The Albert Lea girls’ soccer team celebrates scoring its first goal of the evening on a deflection in a 3-1 win Tuesday at Waseca/New Richland-Hartland-Ellendale-Geneva/Janesville-Waldorf-Pemberton. — Micah Bader/Albert Lea Tribune

“Even though they were undefeated, I knew we could do it,” said Albert Lea’s Megan Kortan. “I never doubted us.”

From the opening kick, the Tigers played with energy and confidence.

“Our mindset was really good,” Albert Lea head coach Rick Barnhill said. “Mentally, physically and emotionally, I think we were well prepared for anything that would come our way.”

At the 22-minute mark in the first half, Albert Lea scored the first goal of the game. A corner kick led to a shot by Kortan that deflected off of a Bluejay defender’s head into the net.

Kortan struck again with less than two minutes left in the first half to give the Tigers a 2-0 lead. The Bluejays goalkeeper jumped to no avail, and Kortan found the top left corner of the net from the right side of the box.

“Our shooting was efficient and timely, and our collective team defense was again excellent and well-coordinated,” Barnhill said.

Ten minutes into the second half, the Bluejays struck back. After a save by Albert Lea goalkeeper Hanna DeVries, the Bluejays scored on a rebound. DeVries finished with 13 saves on a misty evening in the mid-40s.

“Hanna was stellar in the goal tonight,” Barnhill said. “They tested her time and again, and she was fearless.”

Albert Lea continued to play keep away and took a 3-1 lead with a goal by Sarah Savelkoul. Holly Wichmann dribbled down the left sideline and centered the ball to Savelkoul for the score. The Tigers’ time of possession was 47 minutes, which left 33 minutes for the Bluejays.

“We were able to keep the ball on their side of the field with good communication and staying positive even when it was on our end,” said Albert Lea senior midfielder Brooke Hanson.

Next, Albert Lea (13-5-1 overall) will host No. 4-seed Mankato West on Friday. Time has not been determined. Mankato West upset the No. 1 seed, St. Peter, 3-1 on Tuesday. Instead of playing St. Peter on the road, the Tigers will play Mankato West (11-6-2 overall) at home. Albert Lea played Mankato West during the regular season, and the game ended in double overtime tied at 0.

“I think we’re all very excited,” Hanson said. “We know we can win.”