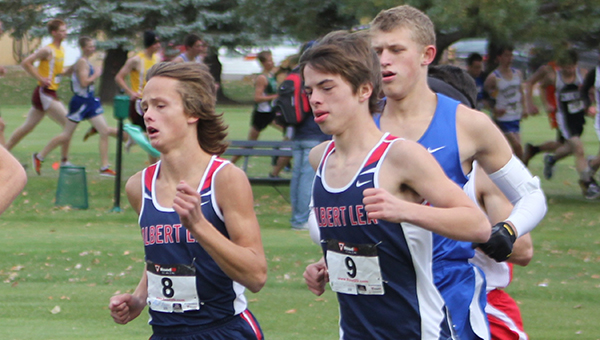 The Albert Lea boys’ and girls’ country teams finished in the top half of competition Thursday at the Section 1AA meet at Brooktree Golf Course in Owatonna. 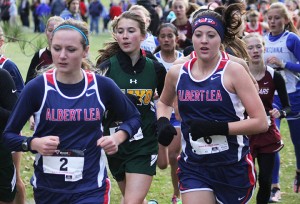 In the field of 16 teams, both of Albert Lea’s teams took sixth place.

The Albert Lea boys were led by Jackson Goodell, who ended the race strong and led the Tigers with a seventh-place finish in 16:19.8.

“Jackson had a marvelous race,” said Albert Lea head coach Jim Haney. “He came out aggressive, stayed with the lead pack and had an outstanding kick.”

Haney said Goodell moved up about seven spots less than a mile before the finish line to secure his spot in the state meet.

However, Goodell didn’t need to make it on that technicality, because he beat all runners from Red Wing and Lakeview North.

“The dedication and determination of these young men has allowed the team to reach team goals,” Haney said. “I wanted to finish in the top half of the section, and we did exactly that.”

“They’ve made a strong impact on the program, and they will be missed next year,” Haney said.

The Albert Lea girls’ team didn’t have a state qualifier, but the Tigers showed consistency throughout the lineup. Anna Englin led Albert Lea in 25th place in 15:40.4, and Haley Harms finished fewer than two seconds later.

“Anna and Haley were our one-two punch,” Haney said. “Those two girls led the way during much of the season and put together an outstanding effort.”

Englin and Harms are juniors, so they’ll be back next year. Rachel Kenis followed eight seconds behind Harms to take 30th place, and Emma Behling crossed the finish line nine seconds after Kenis to take 36th.

Next, Goodell’s season will continue at the state meet hosted by St. Olaf College in Northfield at 11 a.m. Nov. 2.