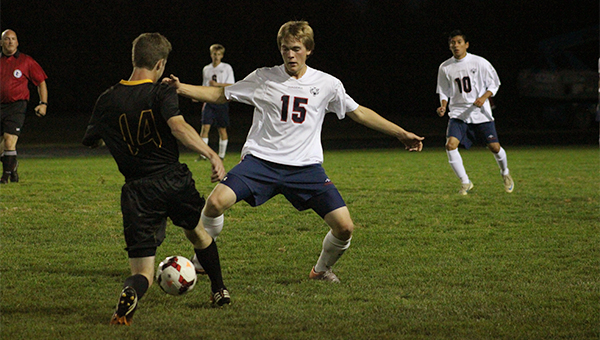 For the second straight game, the Albert Lea boys’ soccer team beat a team with a winning record.

The Tigers edged Kasson-Mantorville (7-3-1 overall) 3-2 on Saturday, and Albert Lea kept the same framework Tuesday on Senior Night with a 4-3 come-from-behind victory over Mankato East (6-5-3 overall).

Despite the two straight one-goal victories, the Tigers had their share of near misses earlier this season. Of Albert Lea’s eight losses, five were by two goals or fewer. 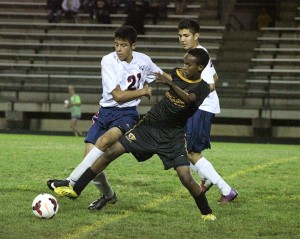 Rodrigo Solis of Albert Lea tries to keep the ball away from a Mankato West defender Tuesday on Senior Night. The Tigers dug themselves out of a one-goal deficit to win 4-3. — Micah Bader/Albert Lea Tribune

“We’re taking everything that we’ve learned through all the adversity this team has faced, and we can see that it’s finally coming to fruition,” Albert Lea head coach Joe Squires said.

In the first half against Mankato East, the Cougars took a one-point advantage. At the 28-minute mark, the Tigers knotted the score when Porfirio Garcia scored on a rebound off of a corner kick. Mankato East took the lead back less than 33 seconds later, but Albert Lea’s Tim Furland tied the game again on a penalty kick.

At halftime, the score remained tied at 2.

The Cougars took a 3-2 lead with 22 minutes left in regulation, but it would be the last time they’d find the net.

Albert Lea evened the score with a penalty kick by Garcia, and the Tigers took their first lead of the game with 8 minutes left on a goal by Riley Ruble with a pass from Elias Lazaro.

“Elias put the ball through instead of taking a shot, and Riley made a bending run in and put it in the top left corner of the net,” Squires said.

From there, the Tigers rode their defense to victory.

“We tried to slow the ball down and keep it out of our half,” Ruble said. “It was a big win. We were hoping to win this one, but we knew it would be a tough game.”

“We have yet to win a road game, so that’s going to be a huge test we’ll try to overcome,” Squires said.