After playing every position on the court, Annie Ladwig found a home as an outside hitter, and it’s been paying dividends for the Albert Lea volleyball team.

The Tigers (15-9 overall) are guaranteed their first winning season since 2006-2007, when the team finished 16-11 overall. Heading into the Section 1AAA tournament, Albert Lea earned the No. 4 seed — the final spot to earn a first-round bye in a group of 12 teams. 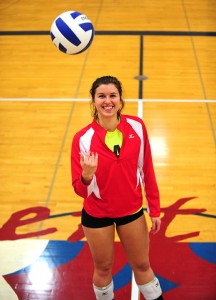 Annie Ladwig, a senior at Albert Lea, is leading the volleyball team with 293 kills this season. Albert Lea has a 15-9 overall record and is the No. 4 seed Section 1AAA tournament. The Tigers earned a first-round bye. — Micah Bader/Albert Lea Tribune

On the attack, Ladwig’s accuracy has been deadly. Her 293 kills in 24 matches leads the team.

“Annie has been huge for us,” said Albert Lea head coach Lisa Deyak. “She’s a leader on the court who can get everyone fired up.”

That excitement showed in Big Nine Conference play this year as the Tigers amassed a 6-3 record, including a 3-1 upset win at Mankato West (26-2 overall), the regular season conference champ.

Ladwig began her volleyball career at age 12. She played setter in the footsteps of her sister, Kat Ladwig, who is seven years older and played the same position at that time for the Tigers.

“I wanted to play when I was in sixth grade, because my sister played,” Ladwig said. “I’d watch all of her games.”

After she gained an understanding of the setter position, Ladwig moved to the net as a middle hitter and to the back row as a libero, she said. In her sophomore year, she made one last transition to outside hitter.

In addition to her offensive numbers, Ladwig is finding success on defense. With 267 digs, she’s second on the team only to libero Camryn Keyeski.

“She leads us in just about every statistical category,” Deyak said. “She’s just a great all-around player.”

Ladwig gave the credit to her teammates.

“If I make a mistake, they always back me up,” Ladwig said. “I can’t imagine not playing with them; they’re the best. We have so much fun. We’re really competitive, and I think that’s what’s been helping us win.”

After the high school season is over, volleyball doesn’t end for Ladwig, Keyeski or fellow outside hitter Julia Deyak. The trio plays on seperate teams for the Northern Lights Volleyball Club in Burnsville.

“They come back to play high school volleyball and bring that experience and confidence with them to the court,” Deyak said.

During the season, Ladwig was recognized as a member of the All-Tournament team at the Hopkins Tournament, where the Tigers went 3-1 and took fourth place by sweeping Park Center, Eastview and Elk River.

Ladwig hopes to continue to play volleyball next season in college, but she hasn’t decided on a school. She plans to major in international business or finance.

After conquering the first round of the section tournament last year with a 3-2 win at Rochester Century, the Tigers have higher postseason aspirations this year.