Ambulance rolls over in crash 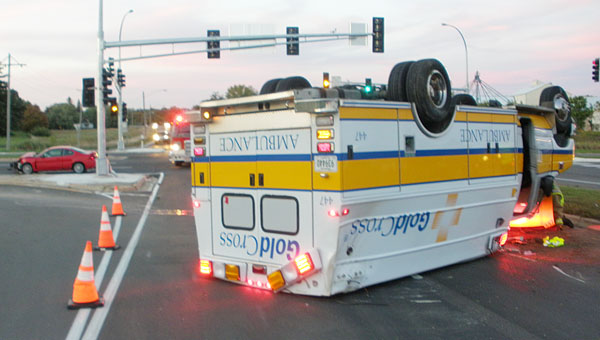 A Gold Cross ambulance sits on its roof after it was struck by a Pontiac Grand Am at the intersection of West Main Street and U.S. Highway 69 Tuesday evening. — Photo courtesy Albert Lea Police Department

A Gold Cross ambulance headed to a medical emergency in Twin Lakes was reportedly struck by a car Tuesday evening — causing the ambulance to roll onto its top — at the intersection of West Main Street and U.S. Highway 69.

No one was injured in the crash, which was reported at 6:36 p.m.

The ambulance, driven by Bennett Schlaak, 36, of Albert Lea was driving south on Minnesota Highway 13 on its way to a medical call in Twin Lakes, according to Albert Lea police reports. Its lights and sirens were activated.

The ambulance had been slowing upon its approach to the intersection, when it was reportedly struck in the right rear axle by a red 1999 Pontiac Grand Am, driven by Andrew Everson, 18, of Glenville, police stated. Schlaak lost control of the ambulance and it rolled onto its top.

When police arrived at the scene, they found the ambulance in the southbound lanes of Highway 69 and the Pontiac facing westbound in the eastbound lanes of West Main Street with extensive front-end damage.

Reports stated Everson did not see the lights or hear the siren of the approaching ambulance and was proceeding eastbound with a green light.

No citations are expected from the crash, police stated.