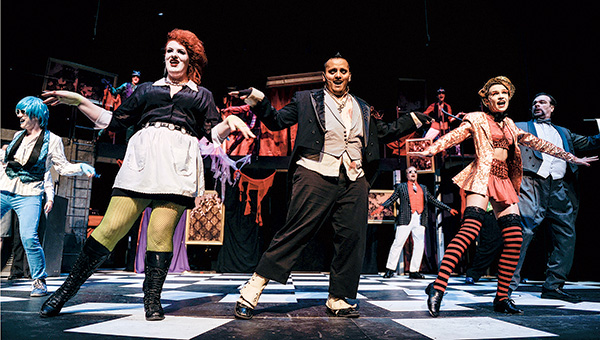 Emma Waters as Magenta, from left, Tyler Slack as Riff Raff and Jannel Howard as Columbia do the “Time Warp” during rehearsal for “The Rocky Horror Show” Wednesday night at Frank W. Bridges Theatre in Austin. –Eric Johnson/Albert Lea Tribune

AUSTIN — A little like the character Janet in “The Rocky Horror Show,” the cast of Riverland’s upcoming production started off reserved and timid before finding their confidence.

“It’s been a journey,” Jessica Williams said of playing Janet and adapting to the campy, over-the-top performance.

Now, the cast and director of the Riverland Community College theater department are shivering with antici — say it! say it! — pation for the second night of Richard O’Brien’s “The Rocky Horror Show,” at the college’s Frank W. Bridges Theatre. The first was Thursday night. Subsequent performances were on Friday and Saturday. The next shows will be at 7:30 p.m. Wednesday through Saturday.

“It’s been going awesome; I am so excited about this show,” said Lindsey Duoos Williams, who is starting her third year at the helm of the theater department.

The 1973 musical comedy-horror — about an engaged couple trapped at the home of a mad “Sweet Transvestite” scientist — was made into a 1975 movie starring Tim Curry, Susan Sarandon and Meat Loaf. Riverland’s show will feature classic songs like “Science Fiction/Double Feature” and “The Time Warp.”

“The Rocky Horror Show” is one of the most bold and adult-themed productions Riverland has put on in recent memory — if not ever. Duoos Williams compared it to performing “Rent!” last year, as both are edgy and feature a challenging, rock-based singing style. But where “Rent!” infused heart and emotion around the edgy subject material, “The Rocky Horror Show” is a full-fledged rock ’n’ roll show that requires the performers to flaunt a bold, in-your-face intensity.

The challenge for the performers, Duoos Williams said, has been to set the nerves aside and just go for it.

“You can’t kind of half commit to rock ’n’ roll; you just have to go there,” she said.

Duoos Williams admitted that wasn’t an instant undertaking for the cast.

“It’s a big challenge for these students,” she said.

‘You have to be shameless’

For the cast of “The Rocky Horror Show,” the challenge has been to throw caution to the wind and embrace everything fans have to come to love about the cult classic.

“It’s definitely the edgiest show I’ve been in so far, which makes it kind of fun,” Williams said, adding the costumes are more revealing than many cast members are accustomed to.

Williams watched the film “The Rocky Horror Picture Show” right before she went to audition to play Janet. She admitted she was still in shock during the audition, but figured she didn’t have to commit to a part right away.

“I didn’t fully realize what the show was about until I’d pretty much already been cast,” she said.

Before Williams auditioned, people described Janet to her as a sweet character. It wasn’t until after she was cast that they pointed out her more promiscuous moments, Williams admitted with a laugh.

While Williams was unfamiliar with the show before auditioning, Joshua Whalen — who plays the “Sweet Transvestite” Frank ‘n’ Furter — owned the film and said it’s always been one of his favorite musicals. But that didn’t mean he was immune to the butterflies. He admitted his confidence from the auditions waned briefly when he saw his name on the cast list, causing him to ask himself, “Can I do this?”

Frank ‘n’ Furter is a character known with boundless confidence, and Whalen has done all he can to ignore the intimidation that comes along with playing the iconic, larger-than-life character.

“You have to go into it with full confidence,” he said.

Whalen’s role is also a challenge because people strongly associate it with Curry’s iconic performance in the film. While Whalen described Curry’s role as brilliant, he isn’t trying to simply impersonate Curry.

“I’m trying to let myself breathe a lot into the character,” he said.

For Whalen, the song “Sweet Transvestite” has been the most challenging for him, as it’s Frank ‘n’ Furter’s introduction to the crowd and his time to make his mark.

“That’s when you need to command the character,” he said.

The cast endured a few uneasy moments, especially early on. Whalen described early rehearsals as jarring, especially since many cast members didn’t have much prior history with one another. However, Williams and Whalen agree the cast has come a long way and is now able to let loose and be comfortable.

“It takes a certain amount of confidence in being comfortable with yourself and your scene partner,” she said.

The challenges have made for a tight-knit cast, as Williams said it’s one of the most dedicated groups she’s worked with.

“Everyone is just so excited to have been cast in this show,” she said.

“It’s just been a hoot; it’s been just outstanding to work with these people,” he said.