Events are this weekend in Albert Lea; the public is invited to join at the church

Ascension Lutheran Church in Albert Lea will celebrate its 50th anniversary on Sunday. This date will mark 50 years to the day of the first service at the new church.

The celebration will begin on Saturday with a fall festival from 3 to 6 p.m. at the church. The public is invited to the free event. There will be hot dogs on the grill, popcorn and refreshments. The church youth will lead kids’ games and face painting. From 4:30 to 6 p.m. there will be a concert by the Gloryland Gospel Band. 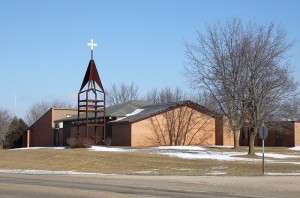 On Sunday, all are invited to worship and participate in fellowship. There will be worship services at 8:15 and 10:45 a.m. featuring the Rev. David Hanson, who was ordained at Ascension, his home church.

Dinner will be served in the Fellowship Hall from 11 a.m. to 1 p.m. for a freewill offering. A 50-year retrospective program will be at 1 p.m., followed by anniversary cake and coffee.

If there are questions about the weekend’s events, call the church office at 373-3408.

The first service on Sunday will follow the current Lutheran Book of Worship. The second service will be a “1963 revisited” service, using the liturgy and hymns from the congregation’s beginnings.

Former Ascension pastors Vern Skarstad, Dick Spande and Zane Anderson (former intern) will be in attendance. Between services there will be coffee and fellowship time for visiting and viewing the many photos and historical displays prepared for the day.

Ascension Lutheran Church was started by the American Lutheran Church American Mission Department in 1963. The location in southwest Albert Lea was selected to serve that fast growing section of town. Charter members of the church originally were members of First, Grace and Trinity Lutheran churches in Albert Lea, but almost half of the new congregation came from other sources.

The original church building was entirely contained in what is now the tall square of the sanctuary. This new church grew rapidly with new members and growing families, so in 1965 the congregation embarked on the first of seven building projects that have expanded the church to its current configuration.

The congregation has lived the ELCA’s mission of “God’s work, our hands” through many programs both within the congregation and community, but also in the world at large. Ascension’s Women of the ELCA group continues to be active, providing quilts, health kits and layettes for Lutheran World Relief and other activities. Since 1991, Ascension Lutheran, a mission church itself, has provided support to a mission partner Lutheran church in Valley Station, Ky. Supporting the mission partner, along with world hunger, have been congregational commitments above the budget each year since that time. In recent years, the youth group at Ascension has been active, sending groups to the national youth convention several times.