Starting this month, every time there is a domestic violence homicide in Minnesota local crime victims advocates will hang a banner outside of the Freeborn County Department of Human Services building. 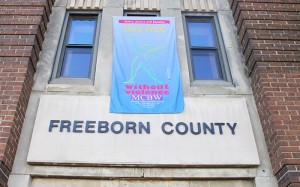 A banner for the Live Violence Free Flag Campaign hangs on the Freeborn County Department of Human Services building on Monday on Clark Street. The banner will be hung after each domestic violence homicide in the state. –Sarah Stultz/Albert Lea Tribune

The purpose of the banner is to increase awareness about domestic violence and to promote involvement in its prevention, said Ilene Grosam with the Freeborn County Crime Victims Crisis Center.

“We’re just hoping that the visual display of the flag is a vision for the whole state to have something tangible that can be looked at and be remembered throughout the year,” Grosam said. “It happens in Minnesota. It has happened in the past in our county. There’s never any guarantees it couldn’t happen again.”

The Live Violence Free Flag Campaign was organized by the Minnesota Coalition for Battered Women and is being launched this month as part of Domestic Violence Awareness Month.

The banner, which features a woman reaching for the sky along with the name of the program, will hang this week in front of the building until the annual community candlelight vigil Thursday evening at New Denmark Park, Grosam said. After that, the Coalition for Battered Women will notify the Crime Victims Crisis Center of new deaths, and the banner will be displayed for a week at a time in the event of a death.

“Domestic violence is not just about the individuals who suffer abuse; it is about an environment that promotes excuses or ignores violence,” according to the program description. “Providing services to victims of abuse is critical for those individuals; engaging the full community is essential for ending violence.”

Grosam said in 2012 there were 217 victims of domestic violence in Freeborn County who sought services through the Crime Victims Crisis Center, which is slightly higher than 2011.

Typically about 95 percent of the reported cases of domestic violence are from women, she said.

She encouraged community members to be supportive of domestic violence victims and to let them know there are resources available to help them.

She said relationships can be particularly dangerous if there are the following risk factors:

• If there has been a history of violence in the relationship.

• If there are firearms or weapons present.

• If the other person has threatened to kill you.

• If the perpetrator is overly jealous and controlling of you.

• If the perpetrator is using drugs or alcohol.

• If the perpetrator has tried to strangle you previously.

Violence can sometimes escalate when a woman is pregnant or if there are threats made by the perpetrator of suicide.

To meet with a crime victims advocate, contact the Freeborn County Crime Victim’s Crisis Center at 377-5460.