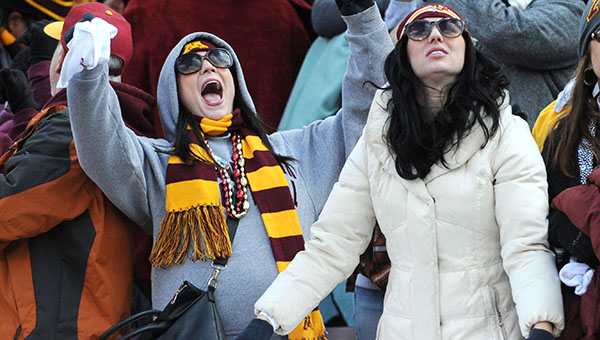 MINNEAPOLIS — Philip Nelson has quarterbacked Minnesota to two straight Big Ten wins, the later being the program’s most impressive victory since it took down Michigan at the Big House in 2005, and he’s not even considered a starter.

“We’re starting to believe, and that’s really all there is to be said right now,” Nelson said. “We have the confidence rolling from week to week and we’re finally starting to realize how good we really can be.” 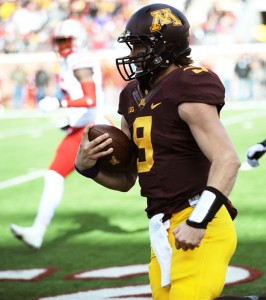 Nelson went 7-15 for 152 yards and one touchdown through the air, he rushed the ball eight times for 55 yards and two touchdowns. Leidner only completed one pass for seven yards, but found the endzone on the ground.

“It’s a great luxury to have, because we love both Philip and Mitch,” Minnesota offensive coordinator Matt Limegrover said. “I know there’s a lot of people out there, you know, they want to name a starter, they want to have that one guy. We feel really good about both, and I think Philip has done a phenomenal job the last couple weeks.”

Fans and media might say that Minnesota (6-2, 2-2 Big Ten) has a quarterback controversy, but there’s nothing controversial about it to the players and coaching staff.

Nelson, a product of Mankato West High School and the Big Nine Conference, is in his second season at the University of Minnesota. He was originally going to redshirt during his first season on campus but lost that status when he started last season at Wisconsin and the six games that followed.

This season, Nelson played in all seven games, completed almost 53 percent of his passes and racked up 644 yards and four touchdowns. He rushed for 356 yards and five touchdowns.

The sophomore quarterback turned the game against Nebraska around when he tossed a beautiful 33-yard-touchdown pass to Derrick Engel on fourth and 10. The play capped off a seven-play 88-yard drive.

“Right when the play call came in, I knew that I was the go-to on that play,” Engel said. “Phil put a good ball up there. At first I thought it was going to be overthrown but then it kind of hung in the air…next thing I know it was a touchdown.”

Nelson’s play down the stretch last season led the Gophers to six regular-season wins, and bowl eligibility late in the season. This year, Minnesota is bowl eligible with four regular-season contests left, meaning their goals have changed for the remainder of the season.

“You don’t sigh and you don’t celebrate,” defensive coordinator and acting head coach Tracy Claeys said. “When you get bowl eligible in October, you reset your goals a hell of a lot higher and that’s what we told the kids.”