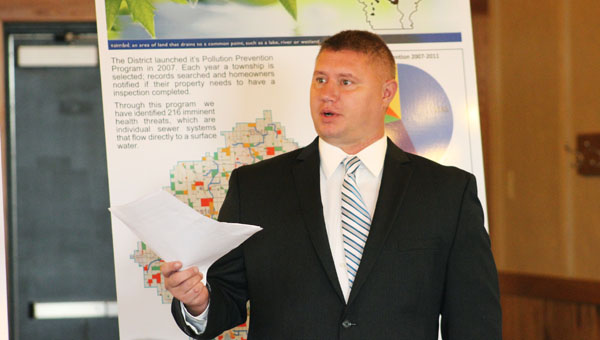 The chairwoman of the House Capital Investment Committee said Wednesday she was impressed with the Albert Lea requests for state bonding funds presented on the committee’s tour across southern Minnesota.

While in town, the legislators heard requests for $7.5 million to go toward the $15 million dredging of Fountain Lake and for $500,000 to finish the Blazing Star Trail extension from Myre-Big Island State Park to Hayward. 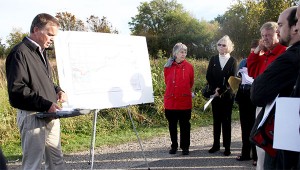 Rep. Alice Hausman, DFL-St. Paul, said the first time she came to Albert Lea was when the city requested funds to clean up the former North Edgewater Park landfill, which had contaminants that were seeping into Edgewater Bay.

On Wednesday, as she heard the request for funds to go toward dredging Fountain Lake at the Edgewater Bay Pavilion, she said she thought back to that visit.

City Administrator Chad Adams talked of the impact dredging the lake would have not only on Albert Lea but also on southern Minnesota and the rest of the state. Hausman said the presenters “told the story well,” as they emphasized the importance of the lake and Albert Lea to people coming in from Minnesota from Iowa. 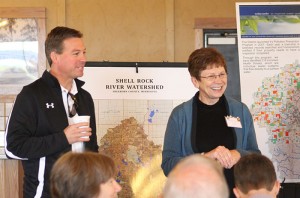 “As a gateway community, we think it’s important to give people the wow factor,” said Watershed District Administrator Brett Behnke.

Andy Henschel, director of field operations with the Watershed District, said the 550-acre Fountain Lake has an average depth of 6 feet with the deepest part being 12 feet.

Over the years, he said, the lake has become filled with sediment — with as much as 5 to 8 feet accumulated in some areas — resulting in water quality impairment and large algae blooms nearly every year. This affects water clarity, wildlife habitat and recreation.

The cost of the project comes from the dredging itself, along with studies, permits, land acquisition and construction. If the state funds are obtained, the other half would be paid for money raised through the local-option, half-cent sales tax.

He said the Shell Rock River Watershed District has completed several projects to control the amount of sediment coming into the lake from upstream and has seen improvements from them, but officials believe more improvement can come from the dredging. 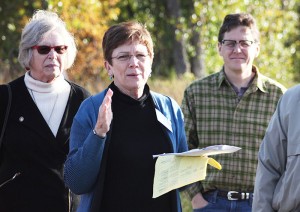 Alice Hausman, chairwoman of the Minnesota House Capital Investment Committee, speaks Wednesday morning during the committee’s stop at the Blazing Star Trail. About 50 people were present.

The district purchased the dredge — named by the community as “Big AL” — last fall for about $340,000, along with the pipes, pumping and other equipment necessary to pump the dredge material away from the lake for $435,000.

District 27A Rep. Shannon Savick, DFL-Wells, said she would do whatever she needed to help move the project forward.

She said she thinks the Fountain Lake dredging project will increase economic development in the area.

“It could bring a lot of money to the area, bring the jobs back and keep our children here,” she said.

Craig Hoium, Austin community development director and ex-officio member of the Blazing Star Trail joint powers board, said the project already has about $1.75 million in previous bonding dollars to apply toward the development of the trail between the state park and Hayward. 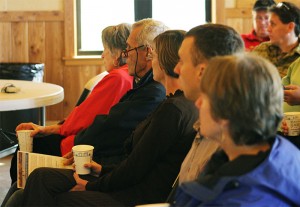 It presently begins at Frank Hall Park in Albert Lea to a point on the northeast side of Myre-Big Island State Park, about three-quarters of a mile from the western shore of Albert Lea Lake’s northern bay. The trail was built in 2003 after five years of land negotiations.

In a letter to Hausman, Hoium said if everything is on schedule, officials anticipate bids will be let the spring of 2014, with construction beginning the same year. The extension would be about 2.9 miles and would include a bridge over Albert Lea Lake.

Along with this, officials will pursue additional land acquisitions for the trail extension to Austin and the Shooting Star Trail, he said.

He attached multiple letters of support from community organizations.

Albert Lea Convention and Visitors Bureau Executive Director Susie Petersen talked about the attraction the trail can be for people coming into the state.

“We have a gem with the trails here, eventually connecting to Austin and Lanesboro,” Petersen said.

The committee had been in Austin prior to Albert Lea and was headed to Faribault next.

AUSTIN — About 20 people stood on a gravel road shortly after sunrise and looked over what seemed to be an ordinary pond in a field on Wednesday.

With hopes of securing more Reinvest in Minnesota funds and various grants in the future, Justin Hanson explained how this was no ordinary pond.

It was the first stop of the day for the Minnesota House’s Capital Investment Committee, which toured southeastern Minnesota and gathered ideas about where to allocate money for future state projects. Just northwest of Austin, the group listened to Hanson explain why the newer techniques for flood and sediment reduction get more bang for the buck.

Hanson referred to the detention pond, which sits in lowland, next to the road and almost acts like a sponge. One couldn’t quite tell, but the road had also been raised four and a half feet. Instead of putting in a culvert and slowly draining the water away, the Cedar River Watershed District and contractors installed a large pond with a small drain leading under the road. In even the heaviest rain events, the water will not come over the road, and the runoff rate toward the river is significantly reduced.

“It’s such an important issue to slow the water down,” Hanson said, and indicated more of these projects will eventually have a significant effect on flooding.

During the presentation, Hausman indicated funding such local projects is better than waiting for federal dollars and for the project to potentially be done the wrong way.

“Who’s going to be better at identifying the local landscape, FEMA or the local resource?” she said.

And Hanson listed multiple benefits of the project. Among flood reduction and sediment runoff, the detention pond creates a new habitat for many animals and protects farm fields.

Both Hausman Rep. Jeanne Poppe, DFL-Austin, said the presentation had an effect and should help secure more funding for such projects in the area.