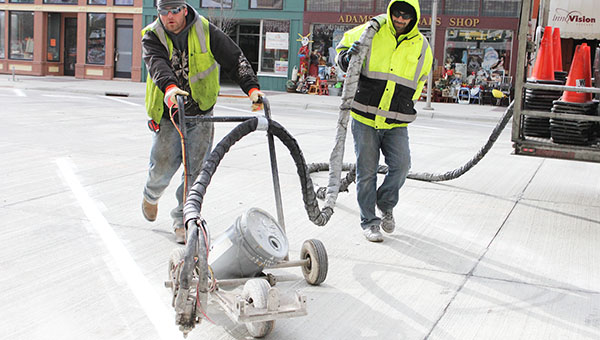 The last stretch of the reconstructed Broadway opened to traffic today. 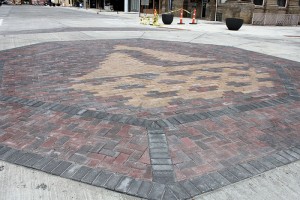 The Albert Lea emblem is featured at the intersection of Broadway and William Street. — Sarah Stultz/Albert Lea Tribune

Though the street, from William Street to Main Street, is completed, crews will continue work on the sidewalk to install planters, benches, trash cans and light posts, said City Engineer Steven Jahnke. He estimated the light poles would be installed in late November.

“Although the road is open, please be aware of construction work still going on and be particularly safe,” Jahnke said. 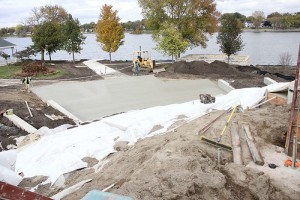 Contractors smooth concrete in Fountain Lake Park Thursday afternoon on what will become a grand staircase in the park. Work is expected to be completed there by the end of November. — Sarah Stultz/Albert Lea Tribune

Contractors are in the middle of the reconstruction of Fountain Lake Park, which is expected to be completed in the next few weeks. They are building a grand staircase leading from Fountain Street to a sidewalk promenade in the park, a handicapped accessible sidewalk and a new boat dock on the lake.

The North Broadway parking lot is scheduled to be be paved next week, Jahnke said.

The $4.6 million project began in May out of an initial need to replace aging infrastructure. Jahnke thanked the public and the downtown businesses for their patience during the construction. The project initially was slated to be done last week.

“I am looking forward to having a beautiful, new downtown,” he said.