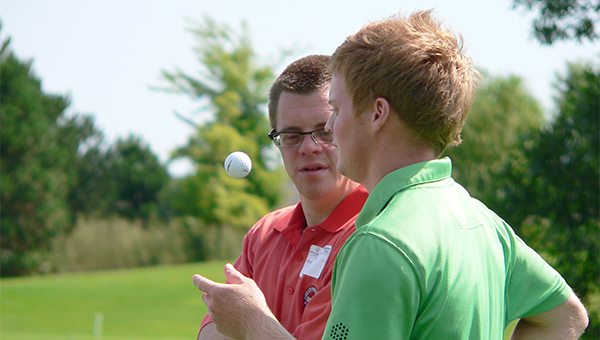 Kellen Kaasa, left, and his brother, Devin Kaasa, will participate in the National Invitational Golf tournament for Special Olympics Saturday and Sunday in New Jersey. — Submitted

Kellen Kaasa became involved with Special Olympics, because his parents were looking for someone to give him swimming lessons — and that was 23 years ago.

This weekend, Kellen will golf in the National Invitational Golf Tournament for Special Olympics at Stockton Seaview Golf Club in New Jersey. Qualifying for the tournament is on Friday, and the competition spans Saturday and Sunday. 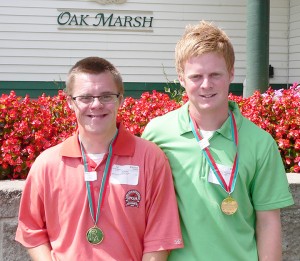 Kellen Kaasa, left, and his brother, Devin Kaasa, pose for a photo after competing together at Oak Marsh Golf Course. — Submitted

Kellen, who has Down syndrome, will compete in the unified division with his brother Devin. The two competed together in the 2004 NIT in California and took home the silver medal. Most Special Olympics events include the unified partner format, where the special-needs athlete participates with a unified partner, according to Kellen’s mother, Dawn Kaasa. In golf, the format for the partners is alternate shot with one score.

“The theory behind unified sports is to get athletes in more of an inclusive setting and for them to get a partner who will help them learn a sport,” Dawn said. “Unified sports is a new focus for Special Olympics”

Kellen became involved with Special Olympics at age 8, which is the age that athletes are allowed to start participating. He participated in swimming, track and field, and bowling. Golf was added as a Special Olympics sport about 15 years ago. Dawn and her husband, Tim, became certified as Special Olympics golf coaches so they would be able to take him to competitions across the state and country.

“We have to drive a little ways to get to the meets to compete, and we didn’t want to ask that of anybody else,” Dawn said.

In 2006, Kellen also competed in the National Special Olympics Games in Ames, Iowa. He golfed in that event as an individual with Devin as his caddy. He also participates in the Minnesota State Special Olympics golf tournament every year. The state tournament has been happening annually since 1998.

Tim encouraged both Kellen and Devin to golf when they were young, and now the course is a second home of sorts for both boys. Kellen is a member at Green Lea Golf Course in Albert Lea and considers that his home course. In addition to the tournaments put on by Special Olympics, he participated in several other tournaments in the area. He’s golfed in the Shortstop Tournament in Albert Lea and other fundraising tournaments, including those put on by Matt Blair and Adrian Peterson.

Both Kellen and Devin, along with their sister, Taryn, were members of the Glenville-Emmons High School golf team when they were in school. Kellen even participated in a B-squad meet in those days. Kellen works at Hy-Vee in Albert Lea and Devin works with Special Olympics as a sports program manager.