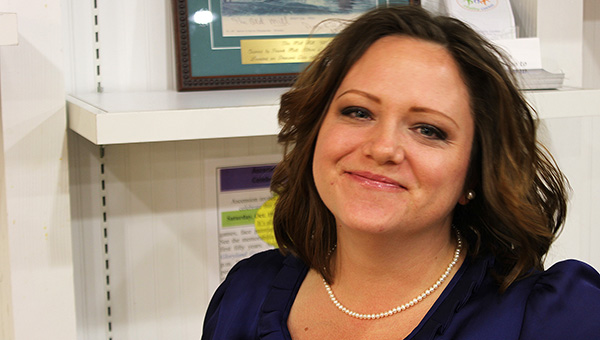 Amy Gauthier resists a smile Monday at the Albert Lea-Freeborn County Chamber of Commerce office at Northbridge Mall. She moved to Albert Lea from St. Paul in July and began employment two weeks ago at the chamber. –Tim Engstrom/Albert Lea Tribune

There’s a new face at the Albert Lea-Freeborn County Chamber of Commerce, and she is an out-of-towner aiming to become an oft-seen in-towner.

Amy Gauthier, 33, moved to Albert Lea with her 6-year-old daughter, Graciana, away from St. Paul at the end of July to make a clean break from the past and start anew. She had friends who resided in Albert Lea — Dan Pelava and Korean Widmer — and they spoke highly of the community. She found the schools were fairly good and decided to make the switch.

She said that when she had her daughter in 2006, she began refocusing her priorities in life. Eventually, that decision led her to school.

Gauthier received her associate of science in business management at Minneapolis Community and Technical College in May 2012. Having worked in the nonprofit sector for a year as a volunteer coordinator for Global Volunteers in St. Paul, she had sought positions with nonprofits in Albert Lea when the chamber job opened up.

“That’s why I am passionate about nonprofit work and service work,” she said.

She said the job market in Albert Lea actually was fairly good. There was nonprofit work available at Senior Resources and some other places.

“I was surprised that much opened up right at that same time,” Gauthier said.

The 1998 graduate of Highland Senior High School in St. Paul said she likes that Albert Lea is close enough to the Twin Cities to visit family. She replaces a position at the chamber that came open when 15-year employee Tami Reicke-Jensen could no longer work due to a severe injury.

Reicke-Jensen had the title of operations manager, but Executive Director Randy Kehr said Gauthier, Sue Axsmith and Geri Jensen each will be trained in all the chamber does, so they can spread the workload among everyone.

“Everyone can do everything,” he said the goal is.

Gauthier, Axsmith and Jensen will be versed in running the events, too, he said. The Albert Lea-Freeborn County Chamber of Commerce runs several. Among them are the Third of July Parade, the Third Grade Farm Tours, the annual Fourth of July fireworks, the Chamber Golf Outing, a 4-H livestock auction and the chamber’s own annual banquet.

Kehr said he was impressed by Gauthier’s professionalism, outgoing personality and work skills. She was selected from among many qualified candidates, he said.

The skills he cited were the ability to organize volunteers, to work with computers, to talk on the telephone and to take photographs.

“Her personality is a good fit,” Kehr said

Gauthier said she is a big believer in connecting with people and working for the good of the community.

“This chamber in reality is very innovative, very forward-thinking,” she said.

She hopes to revisit an effort to get a dog park installed in Albert Lea. She presently is working on the chamber’s Builders Exchange, a program for making contractors aware of available contracts, and she is taking on the chamber’s role in the Leadership program, a class for up-and-coming leaders about how the community works.

Gauthier is into visual arts, she said. She worked for 10 years as a portrait photographer and enjoys painting.

Her favorite holidays are Halloween and Christmas — especially Christmas.

“I am like a huge nerd for Santa Claus. I love Christmas,” she said.

She has a 2-year-old boxer named Daisy, and the two go for walks on the local trails. She likes taking pictures, journaling and playing with Graciana. She enrolled her daughter in Girl Scouts last week.

She declined to explain why she needed to leave the Twin Cities and said she will save that story to share when needing to help people get past pain or relate to troubled times. She said her experience has made her a better person, more caring and more pro-active.

“I feel like I’m just getting started,” she said, “and I’m really excited.”

Address: east side of Albert Lea