Albert Lea police arrested a 24-year-old man believed to have committed an armed burglary on Sunday after a reported gas drive-off Tuesday night that led to a chase and door-to-door search east of Alden.

The man, Trouper Montgomery Gilbertson, of Albert Lea, was reportedly the passenger in a stolen silver Pontiac involved in the chase and was arrested in an empty house near where the car went off the road.

A second man, Bailey Ehren Mitchel, 18, of Albert Lea, who was reportedly the driver of the car, was arrested after he allegedly fled from Freeborn County sheriff’s deputies on foot from the car through cornfields and ended up near Interstate 90.

The Albert Lea Police Department had sent out a plea to the public just prior to 4 p.m. Tuesday asking for help in finding Gilbertson.

Gilbertson was reportedly involved in a burglary at 9:07 p.m. Sunday at 411 Commercial St. Dispatchers received a call that the person living in the house had found Gilbertson in his house with a gun. Gilbertson, who is an acquaintance of the caller, allegedly fled the house with the gun prior to officers arrived. 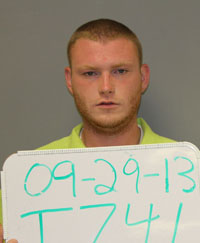 The news release stated police believed Gilbertson was armed and dangerous, and people were encouraged to dial 911 if they saw him.

Freeborn County sheriff’s detective Chuck Malepsy said deputies did not know Gilbertson was in the car prior to the chase.

The chase began after the Sheriff’s Office received a report of a gas drive-off from the Super America gas station at the intersection of Minnesota Highway 13 and Interstate 90 at 6:40 p.m.

The gas station employee stated the car was a silver Pontiac with a broken back window that had been covered in plastic. It was last seen going north on Highway 13.

Minutes later, a deputy found the described car at the Cenex gas station in Hartland. As the deputy approached the car, Mitchel reportedly accelerated and drove across the lot, into a yard, through the ditch and southbound on Highway 13. 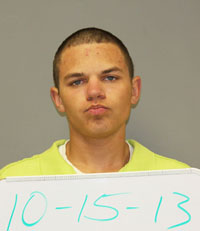 The pursuit went southbound on Highway 13 to County Road 25, west through Manchester to County Road 8, and southbound to County Road 51, just east of Alden. There, the car went off the road, through a field and became stuck. Mitchel allegedly ran from the vehicle and was lost in a cornfield. The release stated he was found a short time later after authorities received a report of a pedestrian near Interstate 90.

After deputies discovered there was a passenger in the car, they conducted a door-to-door search of the area where the vehicle had stopped and found Gilbertson in an empty house.

He was arrested without incident.

The vehicle, stolen from west of Albert Lea, is owned by Electronic Engineering of Des Moines.

Mitchel was arrested on charges of fleeing police in a motor vehicle, motor vehicle theft, fleeing a police officer on foot, theft, reckless driving and failing to yield for a stop sign.

Gilbertson was arrested for fleeing a police officer on foot, aiding and abetting and third-degree burglary.