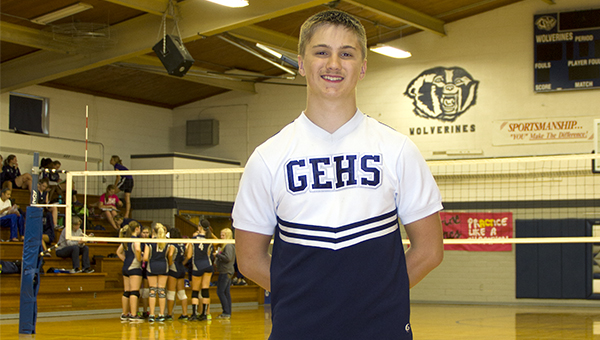 Derrick Kraushaar of Glenville-Emmons has been a member of the cheerleading team for three years. After he signed up, the team encouraged him to stay. — Micah Bader/Albert Lea Tribune

Derrick Kraushaar, a student at Glenville-Emmons High School, has been breaking a stereotype for the last three years.

On game days, Kraushaar, can be found cheering on the Wolverines. He doesn’t cheer from the bench, in the stands or in the press box; He cheers from the sideline, because he’s the first male member of the Glenville-Emmons cheerleading squad.

When Kraushaar made the decision to sign up for the squad two years ago, he not only caught some of his classmates off-guard, he also surprised Tabitha Page, the Glenville-Emmons’ cheerleading coach.

“I checked the list, and sure enough, there was Derrick’s name,” Page said. “When he was at the first practice, I told him we wanted him on the team and would do anything to make him comfortable.”

Despite a warm welcome from the squad, some of Kraushaar’s classmates didn’t understand why he chose not to pursue a traditional sport.

“When I first started, I got a lot of grief,” Kraushaar said. “They’d say, ‘Why are you choosing a girls’ sport?’”

Kraushaar didn’t see it that way, and with encouragement from Page, he didn’t quit. In fact, the naysayers motivated him to work even harder, which holds true to his coach’s philosophy.

“I try to preach that people are going to say what they think, right or wrong. It’s how we handle it that matters,” she said.

According to Page, the people who poke fun at Kraushaar and the team have been overshadowed by overwhelming local support.

“We’re very fortunate to have a community that supports all of its kids,” Page said. “They announce the cheerleaders every game right along with the team they are cheering for.”

Within the last month, Kraushaar started working outside the team practice to sharpen his tumbling skills. He takes private lessons at the YMCA of Austin from gymnastic director, Guy Knepper.

Cheerleading taught Kraushaar some of the same skills as traditional male sports.

“The thing I’ve learned the most about is teamwork,” Kraushaar said. “Whenever we have routines, you need to know what you’re doing. A lot of people don’t understand how much work goes into that.”

Aside from cheering, Kraushaar’s other main interest is playing flute. He said he plans to enroll at the University of Minnesota to cheer, perform in the marching band and major in musical performance.

“He can go so many places with cheering after high school,” Page said. “Or, he can take the things he’s learned and use them in regular life situations.”

Page cheered at Glenville-Emmons for six years before graduating in 2003.