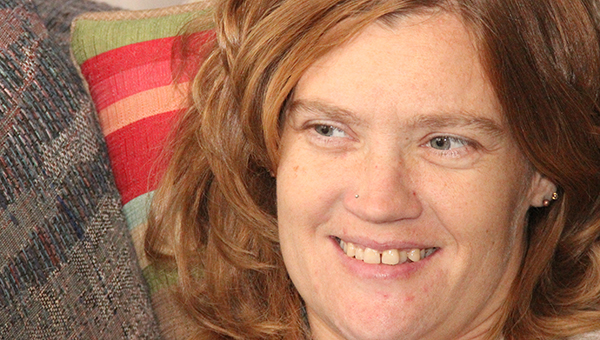 Doctors have diagnosed Josephine Boerner of Albert Lea with dilated cardiomyopathy, a condition that weakens and enlarges the heart. She is in need of a heart transplant because of the damage done to her heart. –Tim Engstrom/Albert Lea Tribune

Albert Lean Josephine Boerner is fighting for her life.

At the age of 37, after suffering multiple cardiac arrests resulting in damage to her heart, she is in need of a heart transplant.

A wife and mother of three, Josephine said she dreams of the day she can receive her transplant and again be able to take part in activities such as riding a bike.

“The simplest things most people take for granted because they can do them, she can’t,” said her husband, Tony.

Day in and day out, Tony cares for Josephine’s every need in their home on North Ermina Avenue as she is too weak to do most things on her own.

She is counting down the days until she can be put on the transplant list in February.

A brush with death

In 2005, when she was 29 years old, Josephine suffered her first cardiac arrest and literally died.

Her sister, Christine Laite, said it took doctors eight to 10 minutes to bring her back.

“I didn’t even realize what had happened until I woke up and was in St. Marys (Hospital),” Josephine said. “At first they wouldn’t tell me what it was. But when they finally told me, the first thing I thought of was my mom. I was scared.” 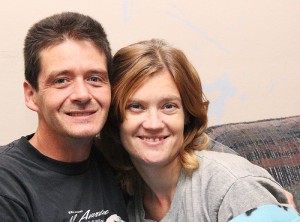 Josephine Boerner and her husband, Tony, have been married for two years. Tony is Josephine’s primary caregiver as she is unable to do most things on her own.

Doctors diagnosed her with dilated cardiomyopathy — the same condition her mother had and ultimately died from at the age of 36. The condition causes the heart to become weakened and enlarged.

“At that age, it’s such a tough age,” Laite said. “It just kind of sticks with you.”

The sisters said they didn’t know at the time their mother died that the condition she had was hereditary. They found that out when Josephine had her first cardiac arrest.

Laite was tested for the condition and was found to have it, along with Josephine’s two younger children.

Shortly after that initial cardiac arrest, doctors fitted Josephine with a defibrillator, and a year later after her heart rate began dropping into the 40s (beats per minute), they put in a combined pacemaker and defibrillator.

Josephine said throughout the years, the defibrillator has saved her life several times; however, in August, her heart took a turn for the worse.

The defibrillator shocked her heart five or six times, but Josephine ultimately coded twice. She was airlifted to St. Marys Hospital in Rochester.

There, she was kept sedated for three days, because every time she would wake up her heart would elevate. The doctors determined the defibrillator needed to be replaced.

While in the hospital, the doctors attempted a procedure called cardiac ablation, which typically uses catheters to correct structural problems in the heart. They found the heart was too far damaged, Laite said.

It is likely she will next be given an artificial heart as she awaits the heart transplant.

Tony has worked minimally since the end of August when Josephine was admitted to the hospital. Though Josephine is now home, she requires round-the-clock supervision, as she is unable to do anything on her own. To get across the room or to the bathroom, Tony has to push her on a seated walker, and most of her days are spent resting or watching television.

Laite said her sister is usually very upbeat and loves to sing and dance.

“Now it’s hard for her to talk without losing her breath,” she said. “She’s just not herself.”

Their only source of income is Josephine’s Social Security, but that is quickly dissolved as Josephine needs to pay two insurance premiums to be considered for the heart transplant list.

“Times are getting financially tough for Josephine and her husband,” Laite said.

They are hoping to move soon to an apartment or home in Rochester where they can be closer to her doctors.

Laite said traveling from Albert Lea to Rochester each week for appointments with doctors has become a challenge for Josephine and Tony, both financially and physically. Josephine struggles even sitting in an upright position.

Because of this, family and friends are putting on a benefit in Josephine’s honor on Saturday. Though Josephine, herself, will not be strong enough to be there, there will be a dart tournament, silent auction and bake sale.

The benefit is at Chubby’s on Broadway, 1119 S. Broadway in Albert Lea.

People who cannot attend the benefit but would still like to donate can drop off or mail donations to American Bank, 217 S. Newton Ave., Albert Lea, in the care of Tony Boerner.

Josephine’s fundraising Facebook page can be found by clicking here.

What: Benefit for Josephine Boerner