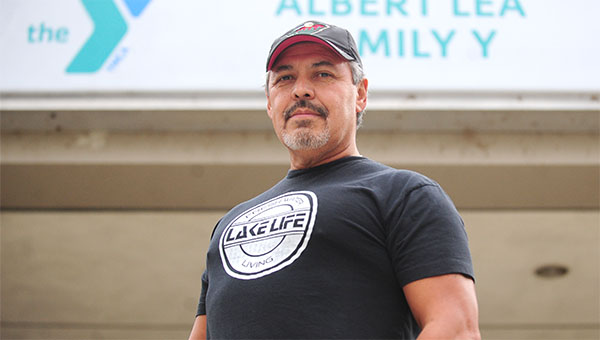 Bill Villarreal, a retired police officer, stands in front of the Albert Lea Family Y, where he works as a group and personal training specialist. –Micah Bader/Albert Lea Tribune

During the last 28 years, Bill Villarreal has motivated many adults and student athletes at Albert Lea High School to succeed on the field, court and mat.

“I’ve been fortunate to be able to train talented athletes,” Villarreal said. “The reward is seeing people do well and meet their goals.”

One of Villarreal’s pupils achieved the highest level of success on a high school wrestling mat. Bryce DeBoer trained with Villarreal since he was 14 years old, Villarreal said. DeBoer focused on football his first three years of high school, but he decided to lose weight and give wrestling a shot as a senior. To do so, he had to drop 38 pounds to make the 285-pound maximum weight.

“Bryce is my favorite story,” Villarreal said. “He worked hard and was really fun for me to train.”

DeBoer trained with Villarreal in conjunction with Albert Lea’s heavyweight wrestling coach Ryan Palmer. His work in the gym paid off, and DeBoer won the 2012 Class AAA heavyweight state championship — an unprecedented accomplishment for a first-year wrestler.

As a guard on the basketball court, Vandenheuvel was a scoring threat from beyond the perimeter and off the dribble last year as a junior. He’ll be recovering from a torn meniscus sustained during soccer season, but he hopes to return to the floor this winter.

“As soon as he gets the word from his doctor and physical therapist, I’ll start him with water exercises to strengthen the joint and work on the muscle,” Villarreal said. “We’re going to have him running, jumping and moving sideways through functional training.”

Villarreal, 58, said he has an abundance of personal experience rehabbing from injuries.

“Being my age and going through my years with the Police Department, I’ve had a torn rotator cuff, broken bones, dislocated shoulders and sprained ankles,” he said. “You name it, I’ve been there.”

Although Villarreal has personal and professional experience with fitness, he started his career at a place with fitness as a priority. He was a member of the U.S. Air Force from 1973 to 1975, and he would troubleshoot problems with fighter jets, he said. Villarreal was a member of the Minnesota Air National Guard from 1975 to 1979 and has extensive experience with law enforcement. From 1977 to 1985, he was a Freeborn County sheriff’s deputy, and from 1985 to 2006, he was an Albert Lea police officer.

“I loved law enforcement more than anything, but I felt I was ready to leave,” Villarreal said. “Who finds a second passion and can say, ‘I love this stuff too?’ That’s what I have with training these kids.”

Villarreal began working at the Albert Lea Family Y in 1985.

“I was offered the position of fitness director to take care of all the youth sports and adult fitness programs, and I’ve been a personal trainer since 2004,” Villarreal said.

Albert Lea Family Y Director Dennis Dieser said Villarreal is dedicated and that he tailors each workout to each individual based on their goals and abilities.

Villarreal said he currently has 35 clients.

He has a wife, Jayne, and five children: Trisha, Kristin, Molly, Melinda and Michael. He also has 14 grandchildren.

Despite having a pacemaker and a defibrillator in his chest because of an irregular heartbeat, Villarreal stays active.

“Fitness is the only fountain of youth, he said. “I’m in better shape physically than I was 15 years ago, because I swim, bike, run, lift and work with the ropes and kettlebells — do cross training. I’m kind of a workout fanatic.”

Interesting fact: Bill enjoys musicals. One of his favorites is “Lés Miserables.”