For the love of hockey 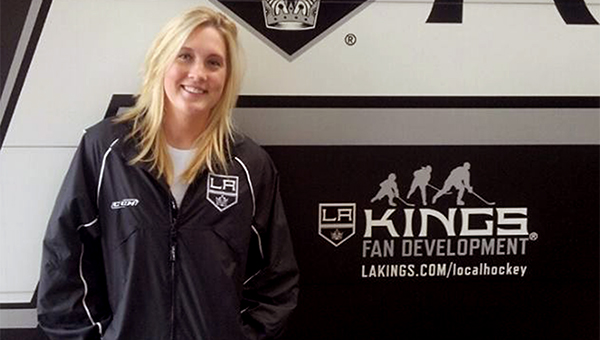 Sarah Jensen, a former player on the Albert Lea girls’ hockey team,  stands in front of a Los Angeles Kings fan development logo at her place of employment. — Submitted

The game of hockey has taken Albert Lea native Sarah Jensen across the country and around the world, and it currently has her stationed in the City of Angels.

Jensen recently moved from her hometown to Los Angeles to start a new job as part of the chariot staff in fan development for the Los Angeles Kings of the National Hockey League. 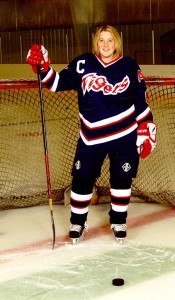 Sarah Jensen poses in front of a net at Albert Lea’s City Arena during her high school playing days at Albert Lea. The 2007 graduate of Albert Lea High School is employed by the Los Angeles Kings of the National Hockey League. — Submitted

Her duties include conducting interactive activities before and after games at the Staples Center, including blow-up puck shooting games and street hockey.

“It’s fun to get the fans involved,” Jensen said. “They enjoy it.”

The Kings’ staff also travels to local organizations around Los Angeles and puts on events for them. Jensen said her staff recently had a street hockey event at a Boys & Girls Club in Carson, Calif.

“We set up the street hockey and they had an absolute blast playing,” Jensen said. “We showed them how to hold a stick and pass to teammates.”

Even though her move was recent, Jensen has already settled into her new home. She said the traffic in L.A. is horrible, but the warm weather makes it worth it. Weather aside, the decision to leave her hometown, her parents Mark and Sheila, her sister Amanda and her brother Jared was by no means easy.

“It was a very hard decision. I love my family, and it was tough to leave them,” Jensen said. “I have a 4-year-old niece that I’m very close with, and it’s hard to know I am going to miss out on her life.”

Jensen was also involved with coaching 12-and-under hockey in Albert Lea and said it was tough knowing that she would not be able to coach them anymore.

To say hockey has been a big part of Jensen’s life would be a vast understatement; She’s been playing since third grade. She played varsity hockey for Albert Lea for six years before graduating in 2007. After graduation, Jensen enrolled at South Dakota State University in Brookings, S.D., and played club hockey there for four more years. She graduated from SDSU in 2011 with a degree in consumer affairs and an emphasis in financial planning.

“I just love teaching people, and hockey is something I know very well and I enjoy being around,” Jensen said. “I guess you could say it’s in my blood thanks to my brother. He was the one who watched hockey and got me interested in the sport. Ever since then, I’ve been hooked.”

In 2010, before her senior year of college, Jensen tried out for a team that the United States was going to send to the World University Games in Turkey. She traveled to Michigan for the tryout and was given an alternate spot on Team USA. She eventually was needed because of an injury when the team went to Turkey in February of 2011. Jensen was one of two non-Division I players to make the team, and she scored a wrap-around goal against Great Britain.

“It was fun, and the girls were super fun to hang around,” Jensen said. “I enjoyed all the food I had over there, and I tried almost everything.”

“It was one of the most inspirational summers of my life. Something I grew up with was a getaway for some kids,” Jensen said. “One girl said she wanted to be like me, and I was taken back. Being in that environment is humbling and makes you thankful for what you have, and you want to do more positive things to help people.”

Jensen said she had one of her sticks cut down to size for the girl at the end of the summer and gave it to her before she left.

“She was very grateful and thanked me, and I couldn’t help but smile,” Jensen said. “She deserved it, and it’s such a great feeling knowing you touched someone’s life.”

Before moving to California and starting her job with the Kings, Jensen worked at Ventura Foods in Albert Lea as a quality assurance clerk.