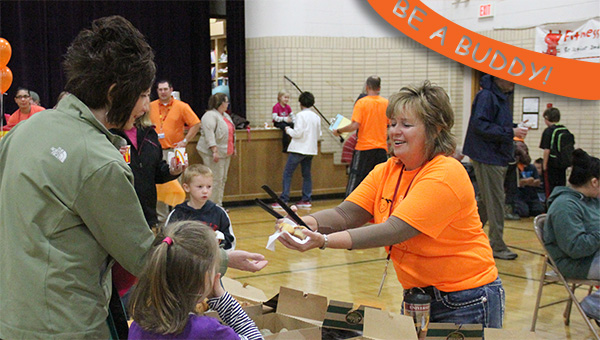 Hawthorne Elementary School teacher Michele Burkard hands out muffins to students and their guests on Tuesday during the school’s Be a Buddy breakfast event. –Kelli Lageson/Albert Lea Tribune

One way the school promotes kindness was its Be a Buddy breakfast on Tuesday. Principal Karen Zwolenski said the event ties into other initiatives and lessons at the school, and it was a pleasant time for students because they invited one adult guest who is special to them.

“This was just a fun morning,” Zwolenski said.

Students were invited to pick out a free book and then have a light breakfast in the gymnasium with their guest. There were muffins, juice and coffee, and students got to sit and visit with their guest before school started at 8:10 a.m.

“Students could ask their mom or dad or just someone who’s special to them,” Zwolenski said. “I would say this is one of our most enjoyable family events we’ve had.”

Parent John Peterson, who has both a first- and fourth-grader at Hawthorne, said it was a good event and said he enjoyed having breakfast with his children. He also said they were excited to pick out a free book, and he was glad to see his first-grader pick out a book with chapters.

“Getting books is something they look forward to,” Peterson said.

The free books were an added bonus at the Be a Buddy breakfast. Mary Jo Dorman, K-12 reading specialist for the Albert Lea School District, said the books were donated from the Walt Disney Co. and acquired through other grants. Dorman said she thought giving out books blended well with the event.

“I just thought, ‘Oh we could do Read to a Buddy,’” Dorman said.

Molly Neumann, an interventionist at Hawthorne, said she loved the idea of giving away books and that she saw many excited faces as kids picked out which book they wanted to take home. Neumann said the event was a fun way to keep families involved at the school.

“It’s a good communication tool and another way to meet families,” Neumann said.

The idea for the breakfast came from social worker Katie Nielsen, and Zwolenski said it grew after lots of staff members chipped in. Zwolenski said the event was a way to recognize National Bullying Prevention Month.

“It’s all part of bullying awareness, and that’s part of the reason for the timing,” Zwolenski said.

Teachers were clad in orange shirts, and everyone who attended was given an orange bracelet band that said Be a Buddy! Orange is the color associated with National Bullying Prevention Month.

“This year we really have been accentuating positive behavior in our school,” Zwolenski said. “It’s sort of our answer to bullying.”

Zwolenski said the school has had assemblies about positive behavior and said teachers and staff are modeling the right behavior and discussing it with students.

“Every week we have essential expectations of how we treat people,” Zwolenski said. 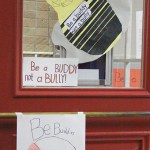 Signs made by students adorn the walls and discourage bullying at Hawthorne Elementary School. 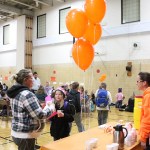 Orange balloons, orange wristbands and orange-clad teachers could be seen at the Be a Buddy breakfast event at Hawthorne Elementary School. The event was held to raise awareness about bullying. 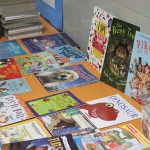 Free books were available to all students during the Be a Buddy breakfast at Hawthorne Elementary School. 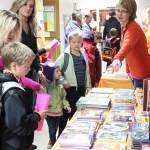 Teachers and parents help students pick out a free book at Hawthorne Elementary School on Tuesday. 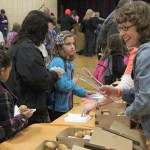 Hawthorne Elementary School teacher Pam Lizotte helps students pick out what flavor of muffin they’d like to eat during the Be a Buddy breakfast on Tuesday. 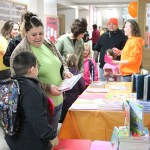 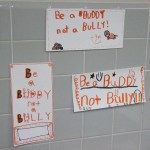 Signs hang around the entrance at Hawthorne Elementary School during an event Tuesday that was meant to raise awareness about bullying. 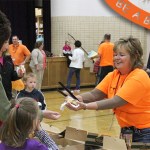 Hawthorne Elementary School teacher Michele Burkard hands out muffins to students and their guests on Tuesday during the school’s Be a Buddy breakfast event. –Kelli Lageson/Albert Lea Tribune

The Freeborn County Sheriff’s Office received a report at 6:56 a.m. today that iPads had been stolen from Glenville-Emmons High... read more