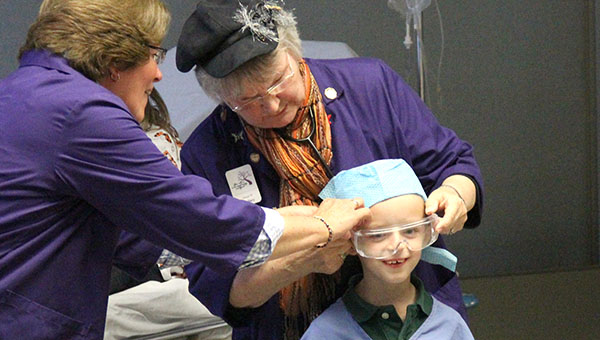 First-graders got special access to areas of the local hospital on Tuesday, and they showed their curiosity at every turn.

First, the tour guides explained some of the common tools that doctors and nurses use. The first-graders chimed in when they recognized casts or to say that they had experienced having their blood pressure checked. Hanson, a former nurse, explained the process of having a cast put on and how doctors cut them off with a special saw.

“It will not cut you; it just tickles,” Hanson said.

Hanson and Tripp showed the students a replica of a skeleton and a plastic model of a human that had removable parts: the heart, brain and other organs.

“Your heart is your pump,” Hanson explained. “It’s a very important organ.”

Then Hanson and Tripp led the students around to a few special areas of the hospital. Hanson recommended the students look for anything with wheels and explained that staff can move more quickly if everything is on wheels.

The first-graders looked into the nursery at The Baby Place to witness a baby that had just been born on Monday evening. Then Hanson took the students to an ambulatory surgery unit room where she explained all the gadgets on the walls.

Each student then got a chance to look at blood up close through a microscope, and they were amazed that it was purple and pink in color, not red. Hanson said sometimes the students make drawings and send them to her after the tour, and often they will draw the blood they saw.

“The ambulance is usually a big hit, too,” Hanson said. That was the last stop of the tour where paramedic Jason Sturgal let them sit in the ambulance and look at all the tools that paramedics use when responding to calls.

“It looks like we’re in a big hurry sometimes,” Sturgal said.

He explained that the paramedics can give medicine and help people from their homes to the hospital. Then the first-graders were treated to pencils and stickers before the field trip ended.

Tripp said the tours are a fun thing that auxiliary members do with students from Albert Lea and Alden. Tripp said she enjoys the tours because she often learns something new as well. Hanson said it’s always fun to hear questions from students and to see how they respond to all the different things they learn.

“I love showing them the skeleton,” Hanson said. “That always gets a reaction.” 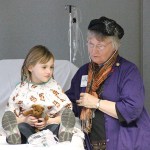 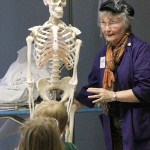 Naeve Auxiliary member Jeanie Hanson explains different bones on a replica of a skeleton to first-graders on Tuesday. 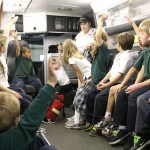 St. Theodore Catholic School first-graders raise their hands to volunteer to be a pretend patient for paramedic Jason Sturgal. The students were touring Mayo Clinic Health System in Albert Lea on Tuesday. 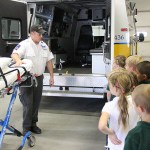 Paramedic Jason Sturgal shows first-graders around an ambulance during a tour of the hospital on Tuesday. 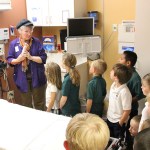 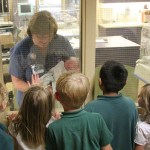 St. Theodore Catholic School first-graders check out a 1-day-old newborn at Mayo Clinic Health System in Albert Lea during a tour on Tuesday. 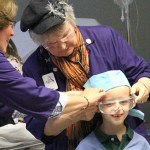