Funeral services for Gordon F. Benesch, 89, of Albert Lea will be at 10:30 a.m. Monday at United Methodist Church. The Rev. Tom Biatek will officiate. Interment will be in Graceland Cemetery. Military honors will be accorded by members of the American Legion and VFW honor guard. Visitation will be from 3 to 5 p.m. Sunday at Bayview/Freeborn Funeral Home and one hour prior to the service at the church on Monday. Online condolences are welcome at www.bayviewfuneral.com. 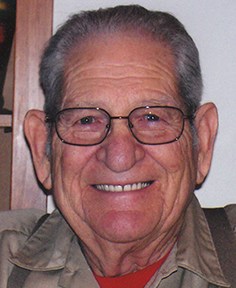 Gordon Frank Benesch was born on June 1, 1924, in Faribault, the son of Frank and Clarabell (Carlton) Benesch. He attended school in Faribault. At the age of 12 he worked for a dry cleaner firing a boiler. At 14 he delivered papers and sold magazines. At 17 he worked in a foundry in Faribault. Following that job he went to Wyoming and worked at a CCC Camp, a government project. In 1941, he came back to Faribault and worked for Wilson & Co. until he was 18, then while working for Gallegar Plumbing and Heating he was drafted into the U.S. Army. Gordon spent two years in France and England during World War II. On Sept. 17, 1949, Gordon was married to Phyllis Smith in Faribault. When he came out of the Army he went to work at Wilson & Co. in Albert Lea. He became chief engineer and worked there until the plant closed. He then went back and worked for Farmstead until he retired in 1992. Gordon was a member of the United Methodist Church. He ushered there for many years and still was able to greet on Sunday mornings. He was a member of the American Legion and the VFW. Gordon liked to travel having been to Maryland, New York, Florida, Texas and California. The last 20 years he traveled in a motor home, spending winters in Texas from 1993 to 2003.

Gordon was preceded in death by his parents; his son, Kevin, this year; and three brothers-in-law.