Spooky fun is coming to the Marion Ross Performing Arts Center this week.

Two different versions of “Frankenstein,” performed at the National Theatre in London, England, will be streamed at the community theater in Albert Lea this week. The shows are two separate versions of the same play. In the first version, at 6 p.m. Thursday, Jonny Lee Miller plays Victor Frankenstein and Benedict Cumberbatch plays The Creature. In the other version, at 6 p.m. Friday, the two actors switch places.

Each show is about two hours long, and is the equivalent of a PG-13 movie so it’s not suitable for all ages. Albert Lea Community Theatre board member Crystal Schatz said the “Frankenstein” shows are both entertaining. 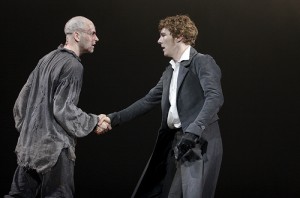 The Marion Ross Performing Arts Center started showing plays from the London theater last week, when it showed “Othello.” More shows are coming up in November, December and January. They are much like viewings of the Met Opera, where the show is actually seen in high-definition on a screen at the theater in Albert Lea. Schatz said when the theater started showing operas she found out that the National Theatre in London would stream plays through the same system. She brought it to the board, and they voted that the theater in Albert Lea should offer these plays.

Schatz said the closest theater streaming the London plays are in Minneapolis, Wisconsin or Illinois. Tickets to the play are $20 for adults and $12 for students; they can be purchased at the theater box office or at the Albert Lea Convention and Visitors Bureau. Schatz said the local theater gets to keep 50 percent of the ticket price. It’s a way for ACT to show more plays throughout the year. 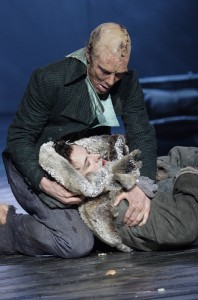 Other upcoming plays to be broadcast in Albert Lea from England include:

Schatz said the shows are world renowned and will give Albert Leans a chance to see something different. And while ACT still will show plays throughout the year, these broadcast plays will be of a different caliber.

“They do have a bigger budget,” Schatz said.

Schatz said she and other board members hope the shows are popular. If this first season goes well, Schatz believes the theater will keep offering the shows from London.