Young and old alike can enjoy a night of family fun scheduled for Monday at Southwest Middle School.

The Harlem Ambassadors, a basketball organization that has been putting on shows since 1998, will visit the school for a game against a team of local business representatives and city officials joined together as the Kiwanis Rockets. 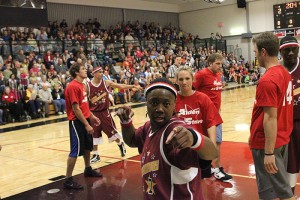 According to its website, the Harlem Ambassadors promotes staying in school and staying off drugs while also exhibiting Harlem-style comedy basketball featuring slam dunks and games with the kids.

Jordahl said during the first and third quarters of the game the teams will play basketball, but during the second and fourth quarter it will be more of a comedy.

She said the Kiwanis Club had considered taking up the event before but at the time was involved with too many other activities.

The eight-player Ambassadors team will be led by Ladé Majic. The Kiwanis Club team, featuring 22 players, will be led by Dennis Dieser with the Albert Lea Family Y, Jordahl said.

Tom Jones and Shawn Riebe will be referees.

Ambassadors will be on hand for autographs after the game.

Tickets are available at Home Federal in Albert Lea and Austin, the Albert Lea Convention and Visitors Bureau and the Albert Lea-Freeborn County Chamber of Commerce. They can be purchased online at www.brownpapertickets.com/event.451193 or from any Noon Kiwanis member.

What: Harlem Ambassadors vs. Kiwanis Rockets