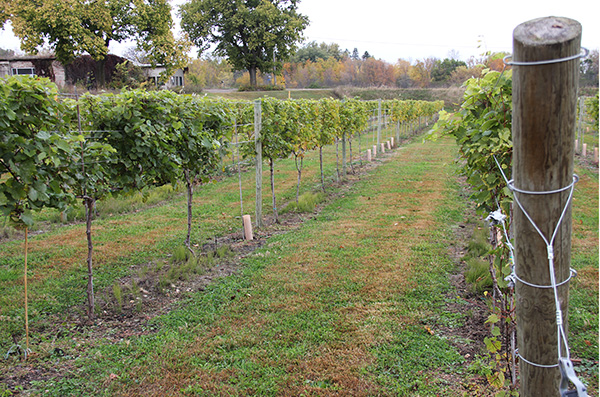 Marquette grape vines line a field to the east of the former Wedge Nursery north of Albert Lea. The Three Oak Vineyards & Winery is on Freeborn County Road 101 about a mile south of the Minnesota Highway 13 interchange of Interstate 90. — Tim Engstrom/Albert Lea Tribune

Albert Lea has a winery.

Three Oak Vineyards & Winery planted vines for two types of grapes in spring 2010 — Marquette, a red, and Frontenac gris, a white. Both grapes are hardy enough to survive Minnesota winters. 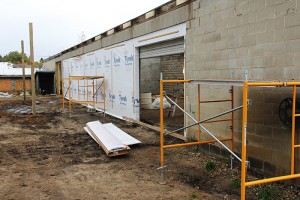 Owners Jay Enderson and Dan Sorenson picked their first crop a month ago and their second two weeks ago.

They had the Marquette grapes crushed and destemmed but left the skins. It’s what’s called must. The Frontenac gris grapes were crushed, destemmed with skins removed, basically made into juice. The liquids were frozen and stored at Minnesota Freezer Warehouse, said Sorenson.

That’s because the guys don’t have a building in which to ferment their product. Sorenson said they are completing work on a building at the former Wedge Nursery, the land from which is owned by Brad Wedge and his sister. Enderson and Sorenson own seven acres of the former nursery that include buildings and have the rights to purchase nine acres to the north. Fermenting will start when work on one of the buildings is finished. It should be weather-tight by winter, Sorenson said.

He said they hope to have wine ready for consumption by next summer.

A second building could be turned into a place that features a tasting room next year, he said. The address is 37505 225th St.

Enderson and Sorenson are Albert Leans who own a company called Rustic Winery, which makes natural wood wine racks and accessories. Enderson owns a company that builds log homes and furniture. Enderson is the majority owner of Three Oak Vineyards & Winery, and together they took out bank loans to make the winery possible. They have done as much as they could themselves to save dollars. They have hired out work they can’t do. 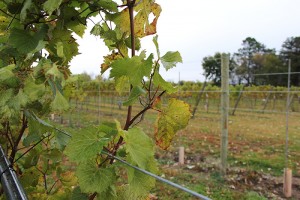 Grapes on vines at Three Oak Vineyards & Winery were picked for the first time a month ago and for the second time two weeks ago. — Tim Engstrom/Albert Lea Tribune

They closed this year on the sale of seven acres of the former Wedge Nursery but were able to plant three years ago as Wedge worked with them on the acquisition. Grapes, Sorenson noted, are not the type of crop with immediate returns.

Now wine is their main pursuit, he said.

It all began because Enderson and Sorenson would go past the property — knowing the deal to sell the nursery to developer Scott LaFavre of Lakeville fell through — and speculated it would make a decent location for wine production. So they pursued buying it.

“We quickly discovered that it would make a great winery,” Sorenson said.

For instance, there is an rectangular area surrounded by arbor vitae that could host outdoor receptions for weddings and other catered events. They hope to have a stage for bands host events through the summer, such as parties, art shows and perhaps the local farmers market from time to time, he said.

They already have received requests for tour buses to stop, and they have had to explain they aren’t open quite yet. But they will welcome the stops when they do open. Sorenson said the location near two freeways should be an advantage. The winery is one mile from Exit 154 of Interstate 90. Many wineries are in out-of-the-way places, so it could be an advantage.

To become vintners, Sorenson said he and Enderson have been learning about wine from the Minnesota Grape Growers Association. They assisted the Whitewater Winery in Plainview with picking and bottling to get idea of what to do.