KATE sports announcer moving so sons can be closer to care 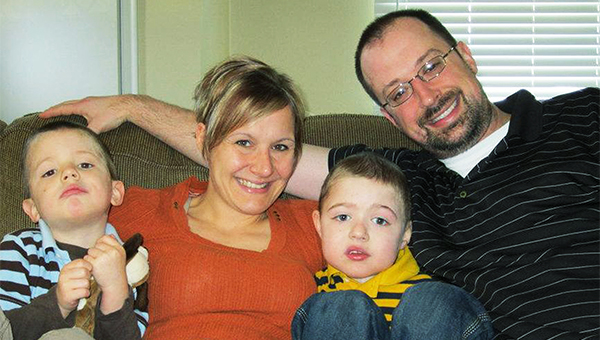 A well-known Albert Lean’s voice will no longer be heard over the radio waves in Freeborn County after next week.

KATE Radio Sports Director Aaron Worm will have his last broadcast on Oct. 26. His wife, Nadine, and sons Lukas, 7, and Isaak, 5, recently relocated to Montgomery.

“We’ve relocated to my hometown,” Worm said. “The main reason is to be closer to family and friends as we deal with serious health issues with our two boys.”

Worm’s son Lukas has a severe case of epilepsy, and his seizures are hard to control with medication. Lukas also has a brain degenerating disease that will mean he may lose some functions as he gets older. The couple’s other son Isaak also has epilepsy, and Worm said doctors have told him and Nadine that it’s possible Issak has or will have the same brain disease as Lukas.

“We just felt like it was time to make that move before things became worse or regressions really started to kick in,” Worm said. “We’re just trying to make the situation maybe a little easier; it’s a tough situation, to make it easy is impossible, but we want to try to help with some of the stress that comes with it.”

The move means that the family is closer to the boys’ doctors at Gillete Children’s Specialty Healthcare. Worm said he and Nadine trust their doctors but hope they might be wrong about the boys’ diagnoses.

“We hope and pray that every day,” Worm said. “We’re hoping some way, somehow that things will turn around.”

Worm said both Isaak and Lukas did well with the stress of the move, and both boys are enjoying seeing their grandparents almost every day. The family now lives close to grandparents, uncles, cousins and friends.

“Grandpa and Grandma have been over to say goodnight and give hugs every night,” Worm said. “Both boys are very happy to be where we’re at.”

Montgomery is 45 miles south of Minneapolis. The city on Minnesota Highway 13 in Le Sueur County. The family will miss Albert Lea, and it will always be like a second home, Worm said. They moved to Albert Lea in August of 2006, and Worm said they thought they would stay and raise there family here.

“The plan coming in was to spend the rest of our lives in Albert Lea,” Worm said. “We love the town, love the people.”

He said their neighbors have always been welcoming. His opinion is that people make the town, and even though Albert Lea might not have every amenity under the sun that it is the nicest community he has lived in.

“Albert Lea just had that comfort feeling to it that it would be a nice place to live and to raise our family,” Worm said.

The Worms made their home near Cherry Avenue and Sheridan Street. They moved here specifically because Worm got a job at KATE Radio, and Worm said his coworkers have been kind and wonderful to him throughout his time at the station.

“The station put together a benefit for Lukas back in 2011, and the community came out and showed us so much support,” Worm said. “We could never thank the community enough for all their support.”

Worm has enjoyed covering sports for the radio station and has especially enjoyed the relationships he’s made with players, coaches and parents. He has had fun covering state tournaments like Albert Lea boys’ hockey and wrestling and New Richland-Hartland-Ellendale-Geneva girls’ basketball, among others.

“I got a chance to just watch a lot of great games,” Worm said. “Being in radio usually gives you the best seats in the house.”

Some of the coaches Worm has enjoyed working with include Roy Nystrom, Larry Goodnature, Joe Sczublewski, Lucas Kreuscher, Max Jeffrey, Rick Barnhill and Paul Willett, among others.

Worm said he will always be a fan of the local teams and schools, and he will try to visit when he can. He also said he would enjoy staying in touch with as many people as he can, and people can reach him at his email aaronworm10@yahoo.com.

There are too many people to thank who have been a part of the family’s time here in Albert Lea, Worm said. Some include staff at Brookside Education Center, the United Preschool teachers and staff, the family’s neighbors, the United Way of Freeborn County and the Albert Lea Family Y. And though it will be hard to leave a place they consider home, Worm said he knows the move is right for his family and he will not be giving up on helping his sons.

“We’ll never, ever give up on them,” Worm said. “Like any parent, we wake up and we fight for them every single day.”