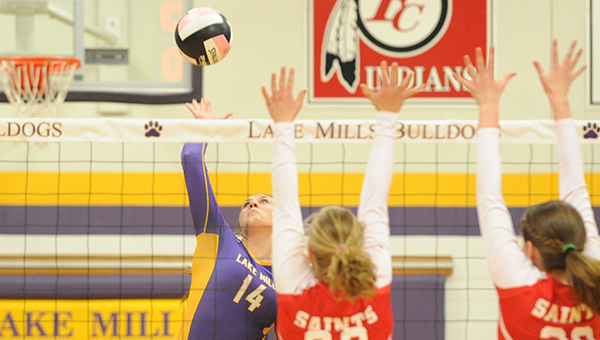 LAKE MILLS — Some question how important momentum is in sports. Its effect was on full display Tuesday night in the Class 2A, Region 1 quarterfinals in Lake Mills. 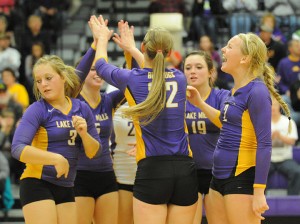 The comeback was a welcome sight to Lake Mills head coach Jim Boehmer, who was not pleased with the way his team looked in the earling going. After trailing halfway through Game 3, Boehmer challenged his seniors.

Hagen responded to her coach’s message.

With Lake Mills down by two points late in Game 3, Hagen went into the first row of the bleachers to keep the ball alive. The Bulldogs won that point, tied the game on the next point and won the game. The Bulldogs ended Game 3 with an 8-3 run.

“You really could almost feel our energy level,” Boehmer said. “We had a couple key points there in that third set. You’ve got a player like Brooke, who goes in there and saves it, Sarah (Orban) brings it back over, and we get that point. That is belief and trust in your teammates.”

The Bulldogs followed their comeback win in Game 3 by throttling the Saints in Game 4. Senior Morgan Christenson had a long string of clutch serves for Lake Mills in the match’s final game. 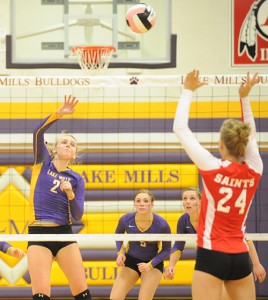 Boehmer also said Sarah Orban, another senior, was instrumental in getting the team back on track after the second game and during the third. Boehmer said Orban told the team to relax, not to be scared and to “play Lake Mills volleyball” going into a timeout that he called.

“She said that going into a timeout, and I almost was like, ‘I don’t have a whole lot else to say,’” Boehmer said. “From that point on, things were a lot different. Sometimes good senior leadership gives you a lot.”

Boehmer said it was easy to see his team was rusty. Lake Mills hadn’t played an opponent in 12 days, because it received a bye in the first round of the tournament.

“We haven’t had that much time off since the season started,” Boehmer said. “It’s a terrible deal, to have to wait 12 days. It’s not an advantage to get a first-round bye, it’s a total disadvantage, I would rather play in the first round every time.”

Though Boehmer said his team was rusty, he was also quick to point out how good St. Ansgar was on Tuesday night.

“They played excellent volleyball tonight,” he added. “And we didn’t really match that until the fourth set.”