LaMars Fred Yost, of Mansfield Township, died on Thursday, Oct. 10, 2013, at Good Samaritan Society in Albert Lea. Funeral services will be at 11 a.m. Monday at Mansfield Lutheran Church in rural Alden. Visitation will be from 2 to 5 p.m. today at Bruss-Heitner Funeral Home in Wells. 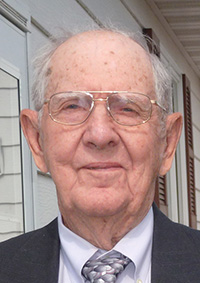 Visitation will continue one hour prior to the service at the church on Monday. The Rev. Don Rose will officiate and interment will be at Mansfield Lutheran Cemetery. Please see www.brussheitner.com to leave online condolences. Bruss-Heitner Funeral Home in Wells is in charge of arrangements.

LaMars was a lifelong member of Mansfield Lutheran Church where he was baptized on Aug. 27, 1922, and confirmed in 1935. LaMars attended a country school called the “Hintz School” in District No. 118. He served in the U.S. Army from 1945 to 1947 and was stationed in Germany and Belgium. LaMars milked cows, raised livestock and crop farmed for most of his life.

Even though retired, LaMars remained very interested in farming and always enjoyed going for rides to check on crops and see the field work. LaMars enjoyed family events and celebrating birthdays and holidays. He will be sadly missed by his family and friends.

Memorials, if desired, may be given to the Mansfield Cemetery Fund or the Mansfield Lutheran Church Stained Glass Preservation Fund.