CLARKS GROVE — A 66-year-old man reportedly fired a handgun at another man Sunday afternoon during an altercation in Clarks Grove. 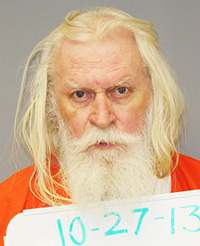 A news release stated dispatchers received a 911 call at 1:04 p.m. from Hanson’s alleged victim. The victim, an acquaintance who lived in the same trailer park, stated he had an argument with Hanson and said Hanson reportedly pulled out a 9 mm handgun, pointed it at him and then fired it. The victim was able to get out of the residence uninjured and then called for help, according to the release.

Sheriff’s deputies, with the help of Albert Lea police officers and Minnesota State Patrol troopers, set up a staging area away from the residence and called Hanson on the phone to get him to come out of the house.

Hanson came out of the house within minutes and was arrested without incident. Authorities seized the gun.

It is unclear about what the two men were arguing.

Look to the Tribune for further information.