Man who got away still at large

The man who reportedly fled police into a cornfield in New Richland on Tuesday — prompting a lockdown at the New Richland-Hartland-Ellendale-Geneva schools — is still at large.

Daniel John Kirsch, 48, had a warrant out for his arrest in Freeborn County for failing to appear at a sentencing hearing last week.

He was scheduled to be sentenced Sept. 26 on a charge of possession of burglary tools. When he did not appear at the Freeborn County Courthouse for the hearing — where he would have likely received probation — Freeborn County Attorney Craig Nelson asked for the warrant.

Kirsch reportedly has an extensive list of prior arrests, including at least a half dozen arrests for driving after a canceled driver’s license and others tied to property crimes.

He also was convicted of selling methamphetamine in 2005. 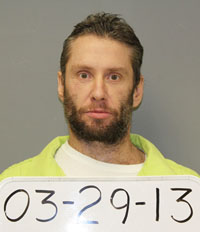 Freeborn County Sheriff Bob Kindler said he did not know where Kirsch was last known to be living and noted that he moved frequently.

He is believed to have taken a 2004 Honda Pilot from the south part of New Richland on Tuesday. The automobile has a license plate number of 131 GCH.

The New Richland Police Department contacted NRHEG school officials after Kirsch reportedly fled Tuesday, and the schools went on lockdown as a precautionary measure as police looked for him about a half mile south of New Richland.

Kirsch has not yet been found.

The New Richland Police Department was unable to be reached for this story.