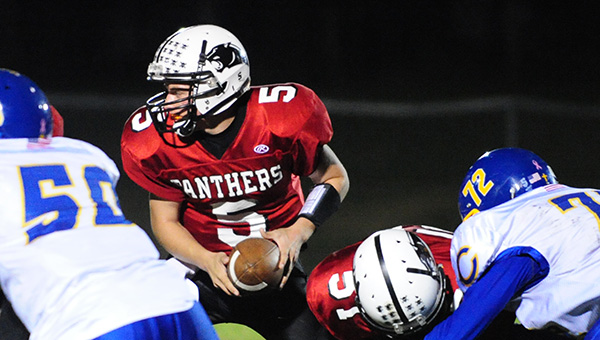 NEW RICHLAND — The New Richland-Hartland-Ellendale-Geneva football team is a team that loves to run the ball, and it doesn’t run away from that fact.

The Panthers ran all over Mankato Loyola on Friday night. NRHEG won 41-7, and the game was called after three quarters because of lightning in the area, but it will count as a completed game. 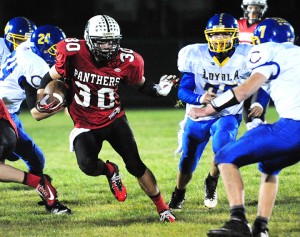 “That’s what we’re all about,” head coach Dan Stork said of the team’s rushing attack. “The guys got it done up front… It was a great team effort, and I’m really proud of them. The offensive line played extremely well, and the defensive obviously played very well too.”

Five of the Panthers’ six touchdowns came on the ground, and three of those rushing touchdowns were scored by running back Dillon Parpart. The senior eclipsed the 1,000-yard mark on Friday.

Parpart’s three touchdowns came in succession to start the game and gave NRHEG a quick 21-0 lead in the first quarter. The touchdowns were 29 yards, 29 yards and 20 yards respectively.

“That kid’s a warrior,” Stork said. “He’s been playing with us since he was a freshman, and you just can’t say enough about his work ethic, determination and leadership.”

Mankato Loyola got on the board before halftime when NRHEG gave it great field position following a sloppy punt play. The Panthers re-extended their lead before the game’s midway point, when Trevor Tracy launched a 52-yard bomb into the hands of Preston Peterson. The toss gave NRHEG a 27-7 halftime lead.

“Tracy has the potential to throw the ball. He just needs a coach that will let him do it,” Stork said with a chuckle. “I think that’s one thing that teams don’t realize about us — we can stretch the field, and we can do some things in the air.”

The wind picked up at halftime, and distant flashes of lightning became more frequent.

NRHEG scored two more short rushing touchdowns in the third quarter: one by Spencer Tollefson and the other by Jason Jongbloedt.

After the third quarter, the referees met with the coaches and decided to end the game. Next, NRHEG will play Gibbon-Fairfax-Winthrop at 7 p.m. Friday.