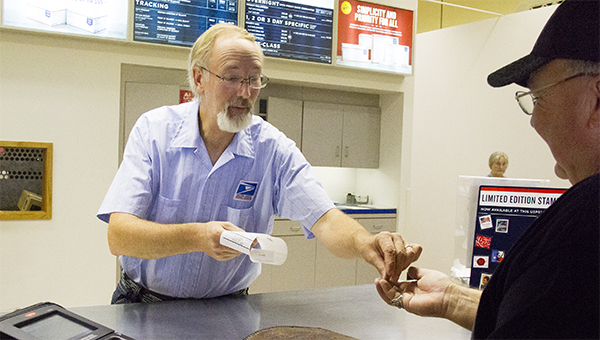 Changes at the U.S. Postal Service in June have affected mail processed at the Albert Lea post office.

Though turnaround on local letters is still one day, the turnaround time for standard parcels has increased — sometimes by as much as an extra three to four days, said local Postmaster John Novotny.

Mail being dropped off at the Albert Lea post office must now take different routes before it reaches its final destination.

Novotny said for at least 20 years, all letters, flats and parcels dropped off in Albert Lea have been taken to a plant in Mankato for processing, but presently mail also goes through the Twin Cities because the Mankato postal plant has limited sortation. 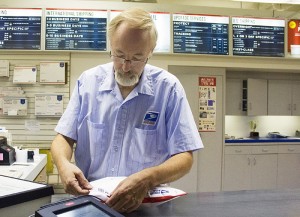 David Stewart places a mailing label on a package on Wednesday at the Albert Lea post office.

Novotny said mail that is dropped off in Albert Lea by 2:30 p.m. — either inside the post office or in the drop off box on William Street — is processed the same day. Letters are taken in a truck at 3 p.m. directly to the Twin Cities for processing and then to Mankato for sorting.

Letters are postmarked out of the Twin Cities area instead of Mankato, he said.

Standard — not first-class or priority — parcels and flats first go to Mankato, then to the Twin Cities and finally to Des Moines before being dispersed to their destinations.

“Our goal is still deliver as fast as we can,” Novotny said.

With Christmas a few months away, he recommended people get their packages sent out at least two weeks before the holiday if they are choosing standard shipping.

The postmaster said he has received some phone calls about the changes, but not as many as he thought he would. He has actually received more phone calls from people inquiring about the government shutdown. He said the entity is not funded by taxpayer dollars, so it is not affected. Mail is being delivered as normal.

Novotny, who also started remotely managing seven smaller post offices in Freeborn County in May, said the changes are taking place because of decreases in mail volume for the U.S. Postal Service and in turn losses in revenue.

Novotny said in the last six years the Postal Service has seen losses of $41 billion. At the same time, mail volume is down 25 percent as people are sending fewer letters and are instead relying more on the Internet and email.

Parcel sales are up 14 percent, largely because of online sales, he said.

Novotny said there is a rumor that the Mankato plant will close altogether next year. At that time letters leaving Albert Lea and being sent to another local address may take two days instead of just one to be delivered.

“It’s sad to think that might happen, but with the mail volume dropping, I don’t know what else we can do,” he said.

There are 38 employees in Albert Lea, including carriers and clerks.