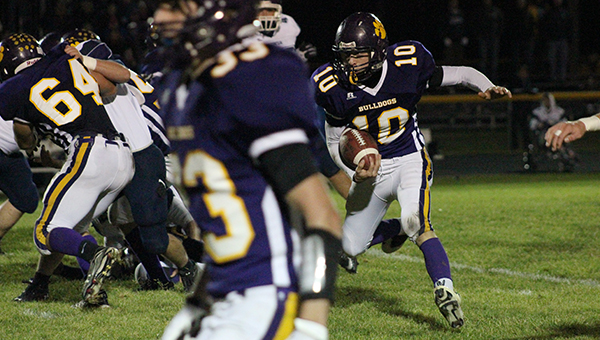 LAKE MILLS — The Lake Mills football team executed its gameplan and challenged the top team in its district on Friday at home.

The Bulldogs (3-5 overall) faced a tall order: the No. 4 Class A Ackley-Geneva-Wellsburg-Steamboat Rock Cougars, a team that’s 9-0. 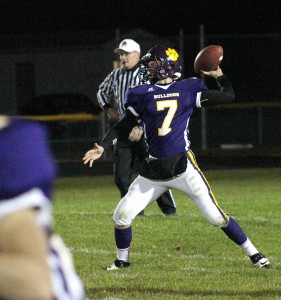 Hunter Kingland of Lake Mills drops back in the pocket to throw a pass Friday against Ackley-Geneva-Wellsburg-Steamboat-Rock. Kingland completed 18 passes for 188 yards, one touchdown and two picks. — Micah Bader/Albert Lea Tribune

Lake Mills head coach Bill Byrnes knew it would be tough sledding on the ground, so his plan was to expose the AGWSR secondary with the quick release of quarterback Hunter Kingland.

“We worked all week long at getting rid of the ball in less than three seconds,” he said. “We just didn’t match up with them up front. They’re big from tight end to tight end.”

The Bulldogs didn’t play like they were undersized. They held AGWSR’s offense in check and forced a turnover on downs near midfield with less than two minutes left in the first quarter.

In the second quarter, the Cougars scored first, but the Bulldogs retaliated less than four minutes before halftime. Kingland found Paul Pins across the middle. Pins made a few cuts and left the defenders on the ground to walk into the end zone unscathed.

Unfortunately for Lake Mills, that was the last time it scored.

Despite battling through numerous injuries, the Bulldogs defense shined as a unit. It forced three turnovers: an interception and two fumble recoveries. In fact, AGWSR didn’t complete a pass all game, except an interception to Noah Irons of Lake Mills.

The Bulldogs, on the other hand, earned 162 passing yards. AGWSR was the polar opposite. With zero passing yards, the Cougars rushed for 274 yards and five touchdowns.

In the third quarter, AGWSR tacked on two rushing touchdowns and then two more in the fourth quarter to pad the lead.

“I couldn’t ask any more out of these kids,” Byrnes said. “They fought tooth and nail. It was a lot closer than the scoreboard showed.”

The schedule doesn’t get any easier for the Bulldogs. Next, they host Bishop Garrigan at 7 p.m. Friday. Bishop Garrigan (5-2 overall) is second in the district standings. The Golden Bears lost 6-0 at home against AGWSR.