Tyrone Washington Jr., accused in the murder of Justina Marie Smith, walks into a Worth County courtroom Monday for a hearing. — Sarah Stultz/Albert Lea Tribune

NORTHWOOD — The Northwood man accused of stabbing his ex-girlfriend to death in August said he has been called racist names and other African-Americans in town have been threatened since he was arrested.

Tyrone Washington Jr., 39, took to the stand Monday in Worth County District Court to argue a change of venue in his case. He faces a charge of first-degree murder in the Aug. 5 death of Justina Marie Smith, 30, in Swensrud Park.

Washington said because Worth County is a predominantly Caucasian community, he could not get a fair trial by a jury of his peers, which he classified as other minorities. He attributed news reports from area media outlets as being prejudicial and of convicting him of a crime before his trial. 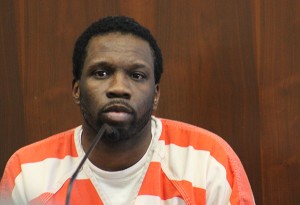 Tyrone Washington Jr. testifies Monday in Worth County District Court about why he should be granted a change of venue in his trial. — Sarah Stultz/Albert Lea Tribune

“I don’t see me having no fair trial in this town, period,” Washington said.

He said he had been living in Northwood’s Schoolside Apartments with about seven to 10 other African-Americans for about three months at the time of Smith’s death.

He referenced an instance in the Worth County jail on Saturday when someone in the jail called him the N-word. He said he filed a grievance with the jail administrator.

In a separate instance, he said he received a call while in the jail from a friend acting hysterically who stated that a group of people had come to the Schoolside Apartments wearing masks and carrying knives saying “you (N-word) need to get out of here.” The officer that they reportedly filed the incident with did not seem to care about what happened, Washington claimed.

He said the media coverage of Smith’s death has created prejudice against him, making people think he is a “vicious, heartless person that committed a crime.”

Flander said the articles have called Washington an “abusive person,” and said there is concern that his family and friends will be singled out and threatened because of the publicity of his case. 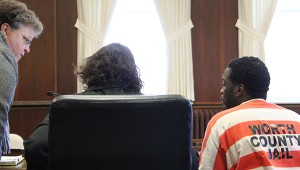 She said she and her client did not agree with having expanded media coverage — aka cameras and video cameras in the courtroom, permitted under Iowa law — and objected to Worth County District Court Judge Colleen Weiland’s order granting this in August.

Laura Roan with the Iowa Attorney General’s Office said it would be premature to change the venue and noted that through jury selection, jurors can be selected who have not yet formed their opinion about the case. She said just because there has been publicity of the case does not mean that people have read or seen those reports or that they even believe what they have viewed.

Roan said she did not disagree that there are few minorities in Worth County but noted an Iowa Supreme Court case ruling that stated a jury must be made up of a cross section of the community.

Weiland said she hoped to issue a decision on the issue by the end of the week at the earliest.

She denied Washington’s motion for a new public defender. He argued he had been treated poorly in the last three months by Flander, but Weiland said she did not find anything that would cause her to be concerned.

He pleaded not guilty to his charge in September.