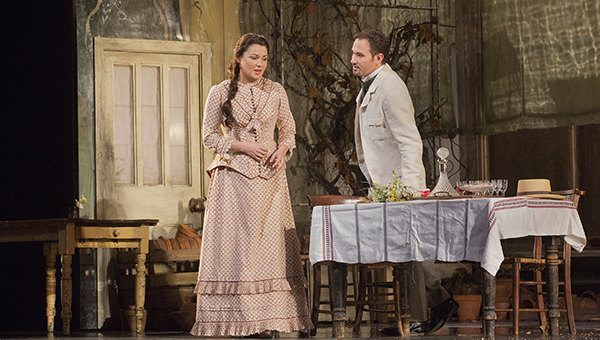 Anna Netrebko as Tatiana and Mariusz Kwiecien as the title character of Tchaikovsky’s “Eugene Onegin.” The opera will be broadcast in Albert Lea on Saturday. — Ken Howard/Metropolitan Opera

The Metropolitan Opera returns to Albert Lea with the first broadcast this Saturday.

The opera begins at 11:55 a.m. There will be refreshments for ticket holders in the green room during intermission, courtesy of Robert and Margaret Myers. 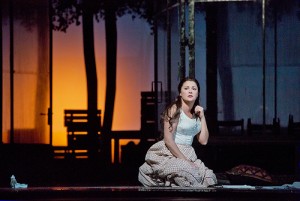 Albert Lea Civic Music and Albert Lea Community Theatre partnered with the Met Opera in New York City to broadcast the operas. All simulcasts have English subtitles so viewers can follow the story. There will be 10 simulcast operas from October to May.

Tickets are $20 for general admission and $12 for students under age 30. There’s also a 10 percent discount for those who buy five tickets at a time. Tickets are available through the box office or at the Albert Lea Convention and Visitors Bureau.

• The Airstream V Camping Rally began today and runs through Monday. The campers are at the Freeborn County Fairgrounds.

• To learn more about Saturday’s Met Opera broadcast there will be a Meet the Met event from 12:15 to 12:45 p.m. at Prairie Wind Coffee.

• High Adventure, a local classic rock band, will play at 9 p.m. at the Big Island Grill & Bar. There is no cost to attend.

• The 27th annual Big Island Rendezvous & Festival opens to the public on Saturday and Sunday at Bancroft Bay Park. Gates open at 9 a.m., and tickets are $12 for adults, $7 for ages 6 to 11 and free for children age 5 and younger. There will be numerous demonstrations, crafts for sale, traditional cuisine and lots more to explore.

• The Albert Lea Farmers Market will be open from 9 a.m. to noon in the Northbridge Mall parking lot.

• The Met Opera broadcast of “Eugene Onegin” will begin at 11:55 a.m. at the Marion Ross Performing Arts Center. There will be refreshments for ticket holders during the intermission. A shortened version of Friday’s Meet the Met event will begin at 11:30 a.m. in the green room at the theater before the show. Tickets are $20 for adults or $12 for students under age 30.

• Sandra Esch hosts a book signing from 1 to 3 p.m. at A Bit Bookish in Clarks Grove. Esch, an Albert Lea native, recently finished the third book in a trilogy that are set in Albert Lea.

• The Emmons Fire Department and first responders will hold their annual pancake breakfast from 7:30 a.m. to 1 p.m. at the Emmons fire hall. Donations will be accepted. Menu includes pancakes, scrambled eggs, sausage and biscuits and gravy. Proceeds help the first responders and fire department with new programs.

• A pancake breakfast benefitting the Albert Lea boys’ soccer program will be from 8 a.m. to 12:30 p.m. Tickets are $7 and are available from players or at the door.

• The 27th annual Big Island Rendezvous & Festival continues at Albert Lea’s Bancroft Bay Park. Gates open at 9 a.m., and tickets are $12 for adults, $7 for ages 6 to 11 and free for children age 5 and younger. There will be numerous demonstrations, crafts for sale, traditional cuisine and lots more to explore.

• Albert Lea’s United Methodist Church will host the Alaska String Band at 2 p.m. Cost is $10 for adults, $5 for students, $20 for families and free for ages 5 and younger.