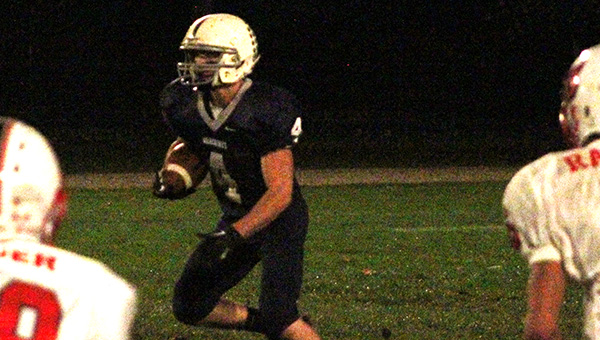 NEW RICHLAND — The New Richland-Hartland-Ellendale-Geneva volleyball team and the community that makes up the school district came together to raise awareness for breast cancer on Thursday night. The night, however, did not end with a home-team victory. 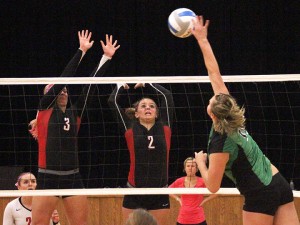 The Panthers fell 3-1 to Waterville-Elysian-Morristown on Dig Pink Night in New Richland. All of the Panthers wore pink socks and headbands for the annual event.

“It’s very cool that the community steps up and raises money for it,” NRHEG head coach Onika Peterson said. “I think you can say everyone knows someone who has cancer.”

The three games that WEM won, were won rather easily. The Buccaneers won first two games 25-15 and 25-18. NRHEG was able to make a comeback in the third game, and won 25-23, but the momentum was short-lived as WEM shot out to a quick lead in the final game, en route to a 25-16 win. 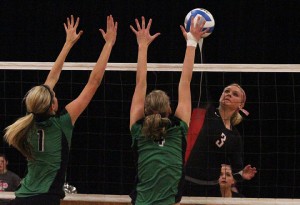 Peterson said this year’s squad might be the most athletic one ever at NRHEG, but said that she was having trouble keeping the girls focused.

“We’ve had an absolute rollercoaster the past couple weeks of just trying to figure out what we can do,” Peterson said. “We don’t have any more easy games, and depending on what team we have that shows up, it can go all over the place.”

NRHEG had moments where it looked good on Thursday, but it lacked consistency. After scoring two or three points, the Panthers would let WEM go on a roll for six or seven in a row.

“We just have to keep the momentum rolling,” Peterson said. “I think the biggest thing, is you can tell we don’t play…We can’t have problems where it’s falling between two of us, because we’re not talking or we’re not communicating, and we’re not busting our butts to get to the ball.”