Rebels are upset by Panthers 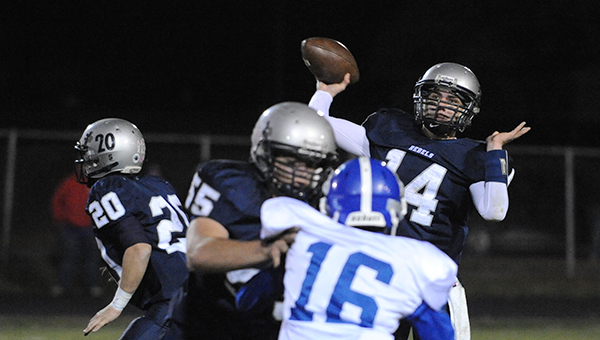 The Rebels lost 20-14 and trailed 12-0 halfway through the fourth quarter, before an interception by Walker Linde on a tipped pass from Dylan Herman gave USC a spark.

Linde’s pick set the Rebels up at the Panthers’ 3-yard line, and Herman plowed into the end zone on the next play.

On the ensuing drive, the Panthers found the end zone and made the two-point conversion to take a 20-7 lead with four minutes left.

The Rebels needed a touchdown, onside kick recovery and another touchdown — and they nearly got it.

USC ate up yards through the air and faced fourth-and-15 from the 25-yard line. After deciding against his first option, Rebels quarterback Travis Brown found Linde in the end zone to cap a drive that lasted 1 minute, 16 seconds.

“The idea was to get the over-the-top coverage on me, so we could go underneath,” Linde said. “But they jumped the underneath route and left me wide open. I was just sitting there waving my arms.”

Brown built chemistry with his receivers during the eight-game regular season, Linde said.

“If I break open past the coverage, he usually finds me,” he said. “It’s been like that the whole year.”

The Rebels’ onside kick went out of bounds, but the Panthers’ drive stalled at USC’s 25-yard line with 45 seconds left. Tracy-Milroy-Balaton drained the game clock to 15 seconds, which gave USC 10 seconds to run a play after the punt. The game ended after the next play.

To build the two-score lead in the first half, the Panthers scored on two big plays: a 65-yard touchdown on the first play from scrimmage, and a 26-yard pass early in the second quarter.

“Our players all played well,” said USC head coach Brad Huse. “We just gave them those two plays in the first half and fumbled at the wrong time.”

The Rebels fumbled twice — both times inside the Panthers’ five-yard line.

After starting the season 1-3 with a one-point home overtime loss to Maple River, USC rebounded with four straight wins.

The Rebels beat Lester Prairie/Holy Trinity and Bethlehem Academy in overtime, thrashed Waterville-Elysian-Morristown 28-0 and won a 13-12 thriller against St. Clair in the regular season finale.

USC’s 5-3 overall record gave it a No. 2 seed and a bye in the quarterfinal round of the section playoffs.