Residents offered screening of ‘After Life’ at The Mills theater 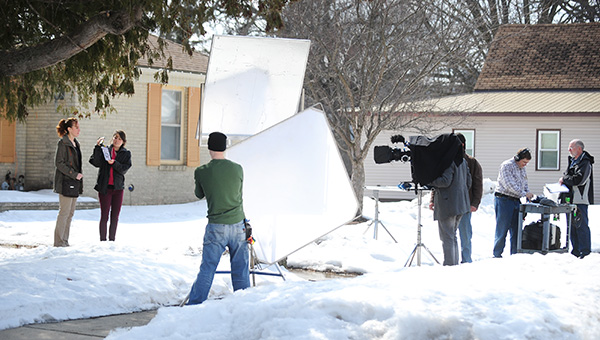 A film crew shoots a scene in Lake Mills on March 27 at the home of Donna Lair. The crew shot scenes several days in Lake Mills for the film “After Life.” — Brandi Hagen/Albert Lea Tribune

LAKE MILLS — Area residents can get a sneak peek of My Town Pictures movie “After Life” at The Mills theater this week.

“After Life,” filmed in part in this community earlier this year, began showing Friday at the theater and will continue for a week. 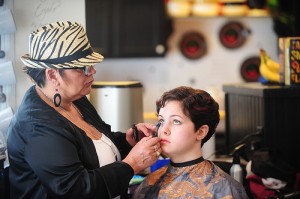 Lake Mills resident Gretchen Joy Skellenger has her makeup done by Franci Sciorrotta at the Razzy Retreat in Lake Mills for the filming of “After Life” earlier this year. — Brandi Hagen/Albert Lea Tribune

“It’s emotional and it’s funny, and it seemed to hit the right chords with people,” said writer and producer Scott Thompson, of the reaction the film got from people at the Friday night showing.

“After Life” is about a television psychic who claims to be able to speak to the dead. The psychic teaches his college-aged daughter, Mara, how to do what he does. Mara uses her skills on a man whose wife has been missing and presumed dead for more than 20 years, but is shocked when she accidentally runs into the man’s dead wife who is alive and well and wanting to stay hidden. The film is a dramatic comedy about many people’s need to find a better life than the one they have, and how hard it is.

The movie was filmed in Lake Mills, Forest City and Buffalo Center, Iowa.

Dolan, an actress who played Margo on “As the World Turns,” has been in Thompson’s films before and plays the role of the not-so-dead wife in “After Life.”

Leading the cast as Mara was Lake Mills native Gretchen Joy Skellenger, the daughter of Allan and Willie Skellenger. 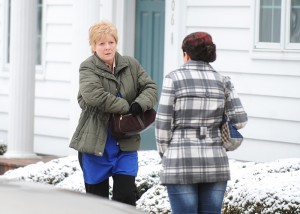 Ellen Dolan, a professional actress who played the role of Margo on “As the World Turns,” films a scene in Scott Thompson’s “After Life” in Lake Mills on April 12. — Brandi Hagen/Albert Lea Tribune

“It went well,” Thompson said. “It turned out about as we expected — really good performances from all of our national cast members and especially from our leading lady. Gretchen did such a nice job and really showed she was on a par with the national actors who also came in and did a great job.”

Some of the other Iowa actors who played a role in “After Life” were Matt Eastvold of Forest City, Catherine Penning of Eldora, Iowa, and Jim Brockhohn of Forest City.

At least 50 local extras were used between the three towns the filming took place in.

Thompson said the film is still in post production so there may still be some minor flaws with it during the screenings. Producers are adjusting audio and color grading to get it ready for the market.

“They’re actually the very first audiences to ever see it,” he said. “People coming should be intrigued by the fact that they’re part of something they don’t usually get to be a part of.”