Ed Mikulich, of Albert Lea, received the 2013 Retired Educators Association of Minnesota Educator Award at the state convention Sept. 16-18 at Treasure Island Resort and Casino in Red Wing, according to a press release.

The Educator Award is presented to noteworthy REAM members who have contributed to the growth of REAM or a local unit and has been active in educational and community service. 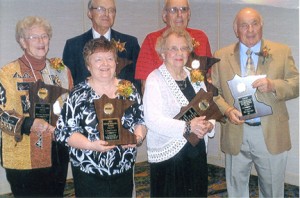 Mikulich earned his masters degree from Mankato State University. After 34 years of teaching and coaching football, basketball and softball and serving as a referee and umpire, Mikulich retired in 1998.

He was the chief negotiator for 25 years and president of the Albert Lea Education Association. He served on the executive and budget committees for South Central Uniserve and chaired the council for negotiations. Mikulich was a board member of MEA for 24 years, executive council for 12 years and executive committee for eight years. He also served as a delegate to NEA, lobbied state legislators and presented many workshops.

He is also a member of Education Minnesota Retired and serves as a board member for Congressional District 1 and is a legislative committee member.