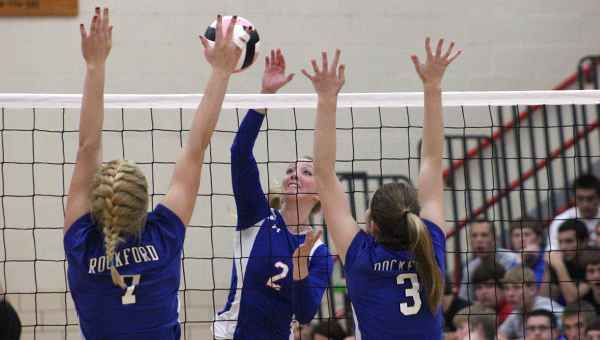 Chandler Capitani of Northwood-Kenset spikes the ball against Rockford Tuesday in the quarterfinal round of the Class 1A Region 5 tournament. The Vikings fell 3-1. — Micah Bader/Albert Lea Tribune

MASON CITY — The Northwood-Kensett volleyball team lost to Rockford 3-1 Tuesday in the Class 1A, Region 5 quarterfinals, after beating the Warriors in both regular season meetings .

Northwood-Kensett swept the Rockford 2-0 by more than five points in both games in mid-September at the Central Springs tournament, and despite the fact that the Vikings won the second meeting at Rockford, the games were considerably closer. The first three games ended 25-23. Rockford won two of the first three, before the Vikings rallied for the win. 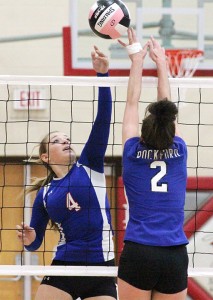 Jasmine Schmidt, a senior outside hitter for Northwood-Kensett, attempts to tip the ball over the net Tuesday against Rockford at Newman Catholic High School in Mason City in the Class 1A, Region 5 quarterfinals. The Vikings lost 3-1. — Micah Bader/Albert Lea Tribune

“They (Rockford) had improved tremendously since the last time we’ve played them, so I knew it was going to be a challenge,” said Northwood-Kensett head coach Heather Rheingans.

In Game 2, the Vikings built an 11-3 lead with multiple kills by Chandler Capitani, but Rockford stormed back to tie the game at 17. The Vikings responded with a 5-2 run that was capped with a kill by Katelyn Jaspers. However, the Warriors tied the game at 24 and went on to win 26-24 to tie the match at one game each.

Riding momentum from its come-from-behind win in Game 2, Rockford controlled Game 3 from start to finish. It jumped out to a 4-0 lead and pushed that advantage to 10 points (18-8) before winning 25-11.

Facing elimination in Game 4, Northwood-Kensett broke a 3-3 tie with a block by Jordan Wright, which was followed by a kill by Hattie Davidson. However, Rockford managed to tie the game at 20 and eliminated the Vikings from the postseason with a 5-2 run to end the game and the match.

Without counting a 2-0 out-of-state win over Glenville-Emmons, the Vikings finished 15-9 overall, but Rheingans said that’s not what the team will be remembered for 10 years down the road.

“They’re going to be the team that showed us what its like to be a team, and we’re paving the way for the successful program that’s to come,” she said.

Rheingans is in her first year as head coach of the Vikings, and she said she was happy with how the season turned out. She gave the credit to her players’ dedication in the offseason.