Funeral services for Rosella Marie Rose Bruhn, age 93, of Albert Lea will be at 2:30 p.m. Monday at Zion Lutheran Church. The Rev. Joel Vano will officiate. Interment will be at Ft. Snelling National Cemetery. Visitation will be from 3 to 6 p.m. today at Bayview/Freeborn Funeral Home and one hour prior to the service at the church. Online condolences are welcome at www.bayviewfuneral.com. 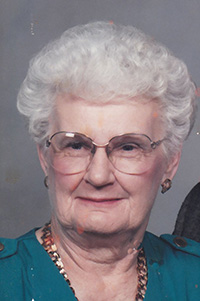 Rosella Marie Rose Bruhn was born on March 9, 1920, in Watertown, to Fred and Minnie (Dongoske) Schmidt. She attended school in Mound through the eighth grade. Immediately following school, she began working with her sister at Boulder Bridge in Excelsior. Rosella worked there until she was married. On Nov. 29, 1941, Rosella was united in marriage to Kenneth Bruhn in Excelsior. When Kenny was drafted into the military they lived in Ohio and Texas. Together they had two daughters, Beverly and Sandra. Kenny was sent overseas at the time Beverly was born, and he did not see her until she was 2 years and 4 months old. Rosella worked as a housekeeper and homemaker most of her life. After his discharge they made their home in Navarre. In 1957 the couple moved to Albert Lea. Rosella was a member of Zion Lutheran Church and she enjoyed baking and cooking. She especially enjoyed watching her grandchildren.