An Albert Lea salesman has won an all-expenses-paid trip to the Caribbean Sea island of Nevis.

Daniel Hanson of A-Best Sew & Vac was awarded the trip for winning the 2012-13 National Sales Challenge held by sewing machine company Janome America Inc. In Las Vegas in August, he competed in three rounds of elimination against Janome Sales Associates from across the United States. 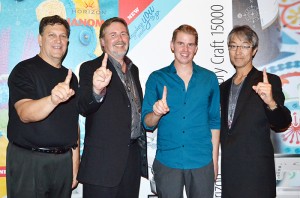 The challenge began in 2012 with an open invitation to the Janome dealerships nationwide. Between May 1 and Sept. 30, sales associates kept track of how many Horizon Memory Craft 12000 sewing machines were sold. These results were sent to Janome America headquarters. From the pool, the top 12 were invited to the annual dealer convention, called Janome Institute.

On Aug. 25, 12 finalists competed, performing a live sewing machine sales demonstration to a panel of three corporate judges. In addition, attendees to Janome Institute were invited to watch the presentations and to cast their votes for the best sales demonstration. Contestants were given a sales scenario before the event and were able to prepare their demonstration before the semifinals on Aug. 25. There, contestants were given scores of zero to five in five criteria: product expertise, persuasive ability, creativity, closing ability and charisma. Contestants with the highest total scores advanced to the next round of competition.

Three were selected as finalists: Daniel Hanson, as well as Ann Maas of Super Stitch in North East, Pa., and Michele Beaugrand of South Sound Sewing & Vacuum in Olympia, Wash.

These three finalists competed on a stage in a hotel ballroom. The three top Janome America executives, President and CEO Toshiya Takayasu, Vice President and COO Michael McDonagh, and Vice President of Sales and Marketing Randy Thomas, presided as judges. Votes were also cast by hundreds of Janome dealers and associates who came to view and judge the competition. Each contestant was given 15 minutes to perform a live sales demonstration, with Janome America employees acting as store shoppers. The judges then used the criteria listed above to cast their vote for the final winner.

According to a news release from Janome, it was close, but Daniel Hanson was able to prove his skills as Janome’s national sales champion.

Janome is a Japanese company with its American subsidiary’s headquarters in New Jersey.

Hanson will go to Nevis with the company’s elite sales performers from June 29 to July 5 in 2014. The island is part of the country St. Kitt’s & Nevis.