Senior competes at state in consolation 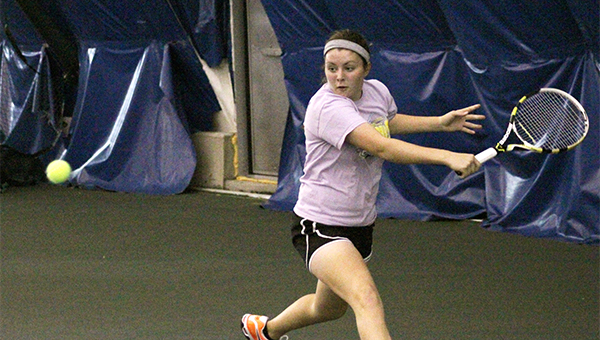 MINNEAPOLIS — Though it ended with a loss to a tough opponent, United South Central tennis player Claire Christian ended her high school tennis career in grand fashion on Friday.

Christian, who was one of two seniors on this year’s Rebels squad, led the team to the Class A State Tournament, and also qualified individually for the second straight year.

Christian dropped her first match on Thursday to Claire Browning of Aitkin 6-4, 2-6, 6-3. The match between the two Claires was the only one of the first round of the Class A tournament to go to three sets. 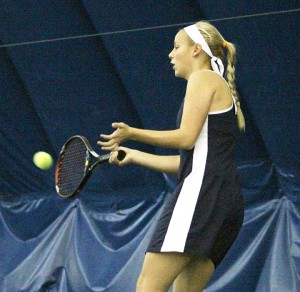 Kia Legred of United South Central connects with the ball at the 2013 Class A girls’ state tennis tournament as part of a doubles team with Linsey Thisius. The Rebels also competed at the state tournament in the singles and team categories. Claire Christian competed at the state tournament in singles action. USC’s team lost to Staples-Motley in the first round and was eliminated by Providence Academy in the consolation bracket. — Drew Claussen/Albert Lea Tribune

“I was honestly just excited to be there and be playing,” Christian said. “I was upset after my first one — having lost such a close match, but I feel like I played better in the second one.”

Christian rebounded in the consolation bracket by defeating Bethany Ellis from Sauk Center 6-4, 6-2. In the second round of the consolation, she ran into No. 2 seeded Sofia Terzek from Rochester-Lourdes, who had been upset in the first round of the tournament. Christian dropped the match to Terzek 6-0, 6-2.

“I couldn’t have asked for a better way to end my career,” Chirstian said. “I was really proud of my team, and going individually was another one of my goals this year.”

Christian said she was impressed with how the Rebels qualified for state as a team — considering how young they were. USC fell 5-3 to Staples-Motley in the first round and dropped its second match Providence Academy.

“We had a lot of newcomers to the varsity team. It was their first year, so I just wanted to make it as good of an experience for them as I could, especially when we have eight graders, freshmen and sophomores making up a good part of the team.” Christian said.

Bailey said the team as whole benefited from this year’s state run in terms of the experience.

“I think the girls realized we can battle with the best of them,” she said. “Obviously the girls were disappointed after their loss, just like anybody would be, but everybody learned a lot from this experience at state. We saw good competition and it also gave an opportunity to grow.”

USC’s doubles team of Linsey Thisus and Kia Legred also qualified for the state tournament and won their first match before falling to the eventual state runner-up team from Breck.