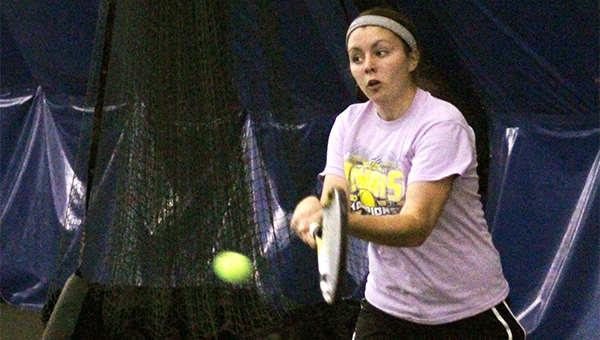 MINNEAPOLIS — The United South Central girls’ tennis team may have been eliminated from the Class A State Tournament on Tuesday, but the season wasn’t over for three members from the squad.

Singles player Claire Christian and the doubles team of Linsey Thisius and Kia Legred were in action Thursday at the Reed-Sweatt Family Tennis Center in Minneapolis.

Christian fell in the first round in three sets, but rebounded in the consolation bracket and took her second match 6-4, 6-2.

The Thisius and Legred team was in an upbeat mood before their first match Thursday morning. The duo wore hot pink shirts during warmups with the word “Da” on one and the other with the word “Bulls” on it. Together they were supposed to be pronounced “doubles.” The sophomore and junior team took down a doubles team from Litchfield 6-2, 6-4 before falling in the second round to Breck 6-4, 6-4. Advancing to the second round and losing meant that the tournament was over for Thisius and Legred.

Christian will be in action on today at 8 a.m. against the No. 2 singles seed in the tournament Sofia Terzic from Rochester Lourdes. If she wins, Christian will play in the consolation championship match at 11:30 a.m.

Read more about USC’s run at the state tournament in Sunday’s Tribune.