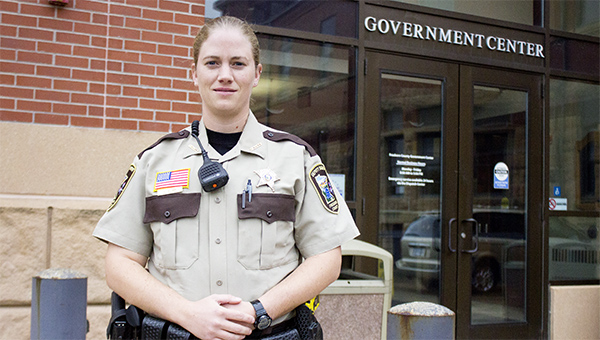 For the first time in its history, the Freeborn County Sheriff’s Office has a female patrol deputy.

Christina Klimp, 32, of Rochester, started with the department Oct. 7 after working as a community service officer in Burnsville.

“I decided it was time to take the next step to be a sworn officer,” Klimp said.

She was one of about 50 applicants — including two women — for the position, said Freeborn County Sheriff Bob Kindler.

“It takes the right type of person,” Kindler said. “Christina came to us as that person. She went through the grueling interview process, and we didn’t make any exceptions for her.”

He said there have been female deputies in the Freeborn County jail for several years, but there has never been one on patrol.

“We’re very delighted to have her,” he said. “For the future, I hope we see more. It’s been a long time getting this one.”

Klimp said she has wanted to work in law enforcement since she was a young girl and has a desire to help people solve problems and to contribute to society.

After working several years in the pharmaceutical industry, with a bachelor’s degree from Bemidji State University, she said she decided that career path was not for her. She went back to school to pursue an associate’s degree in law enforcement from Rasmussen College.

She grew up in International Falls, where she graduated from high school, and her parents presently live in New Prague. She said she didn’t want to get a job in the metro area, so she started looking for a job in southern Minnesota and found the opening in Freeborn County.

She said so far her gender has not been an issue with the other deputies, and they have been “extremely nice and very helpful.”

“Thus far it’s just being treated like another deputy, another person,” she said.

“I’m really hoping to have a long career here and fit in with not only the department, but the community and the county,” she said. “It’s my hope this is a long-term position.”

The Albert Lea Police Department has one female officer on patrol and a female detective who was promoted from patrol.