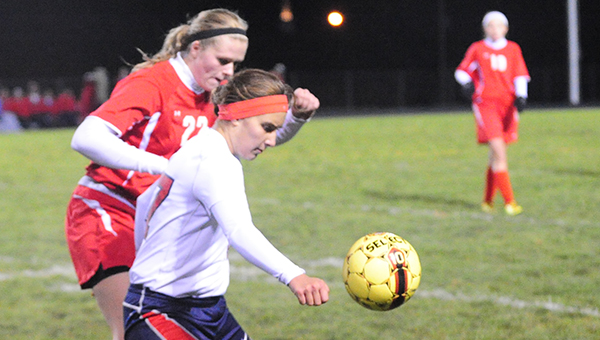 Holly Wichmann of Albert Lea battles a defender from Mankato West for possession of the ball during Friday night’s 1-0 loss in the Section 2A finals at Jim Gustafson Field. — Drew Claussen/Albert Lea Tribune

Albert Lea is eliminated by Mankato West in penalty kicks

A notion exists in sports that sometimes the better team doesn’t win. That notion may have played out on Friday night for the Albert Lea girls’ soccer team. 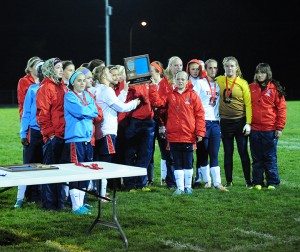 The Albert Lea girls’ soccer team holds the Section 2A runner up plaque Friday after losing 1-0 to Mankato West in a shootout. The Tigers were 13-6-1 overall. — Drew Claussen/Albert Lea Tribune

The Tigers were defeated in the Section 2A final 1-0 by Mankato West when the Scarlets outscored Albert Lea on a chilly night at Jim Gustafson Field 2-1 in penalty kicks. The team that wins penalty kicks is awarded a goal. Individual penalty kicks do not count toward the final score. The result was despite the fact that Albert Lea won the time of possession battle and had a couple golden chances on frame.

“We attacked the whole way, from start to finish,” Albert Lea head coach Rick Barnhill said. “Out of the 100 minutes, we had about 67 minutes in time of possession. We created good scoring opportunities, and we earned seven corner kicks. I mean, the stats favor us in every single category.”

However, all those stats went out the window when the game went into penalty kicks.

“The shootout is the Russian roulette of soccer,” Barnhill said. “It didn’t play out for us this time around, but there’s really no regrets. I know that on my part, and I tried to convey that to the players.”

Along with time of possession, Barnhill said the Tigers outshot Mankato West 21-5.

“It’s hard to come up with an answer as to why it didn’t happen,” Barnhill said of the team failing to score a goal.

Mackenzie Waldemar was Albert Lea’s only player to net a goal during the shootout. McKenna Buisman and Hannah Fox converted for Mankato West.

The Tigers had chances throughout the scoreless regulation and overtime periods, but Mankato West goalkeeper Katie Lauer was extremely strong in goal for the Scarlets. 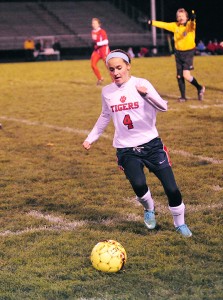 Claire Sherman of Albert Lea dribbles the ball up the field Friday during the Section 2A final at Jim Gustafson Field against Mankato West. — Drew Claussen/Albert Lea Tribune

“I think that was the difference,” Barnhill said. “She turned away a couple nice shots that looked like they were destined to be goals. She was definitely the thing that held them in and kept them in it. That’s the formula, you need good goalkeeping.”

Despite not facing many shots, Tigers’ goalkeeper Hanna DeVries was also very solid in net on Friday night.

“Hanna was good on our end as well,” Barnhill said. “She wasn’t tested nearly as much, but that’s a credit to our defense.”

As expected, emotions were high following the gut-wrenching loss. Barnhill said that even though the loss was going to sting, it was important for his team to remember how much it exceeded expectations this season.

Barnhill likened making the section final to making the Sweet 16 in the NCAA Basketball Tournament and said many teams would jump at the opportunity to take home hardware like the Tigers did.

Every player on Albert Lea’s roster who was able to play participated in Friday’s section final. Barnhill said he had three different front lines rotating throughout the game.

Barnhill, in his 10th season with the Tigers, said the team struggled to find a natural scorer throughout the season. Even though Albert Lea was able to get scoring from many different sources all season, not having someone who could take over a game may have been the team’s downfall on Friday.

“We just don’t have that part of the puzzle yet,” Barnhill said. “But nevertheless, we gave everything that we could give tonight.”

Albert Lea finished the season with an overall record of 13-6-1 after going 8-8-2 last year.