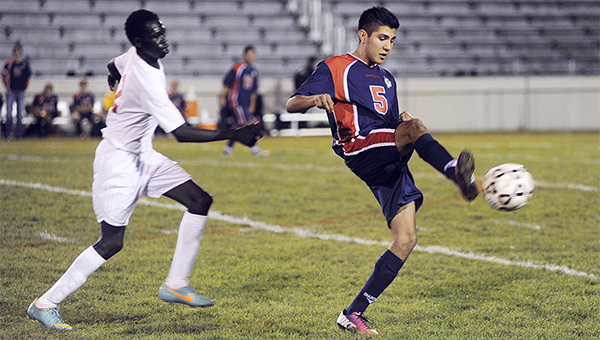 Albert Lea’s Alejandro Garcia settles the ball during the first half of the Section 1A quarterfinals against Austin in Austin Thursday night. — Eric Johnson/Albert Lea Tribune

The Albert Lea boys’ soccer team fought through adversity to reach the Section 1A quarterfinals, but its season ended Thursday with a 2-0 loss at Austin.

The Packers held a one-goal lead at halftime, and they found the net one more time in the second half to secure the win. 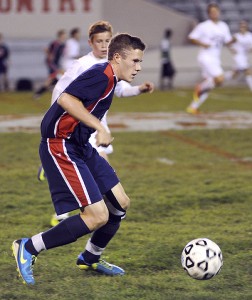 Albert Lea’s Carter Dahl moves the ball during the first half of the Section 2A quarterfinals against Austin in Austin Thursday night. — Eric Johnson/Albert Lea Tribune

When the two teams met during the regular season in Albert Lea, the game went into overtime and Austin won 3-1.

Albert Lea head coach Joe Squires said both teams had chances to take control of the game, just like the first meeting.

“The game was back and forth with lots of counter-attacks,” he said.

Defensively, Squires mentioned that Hunter Tuveson and Preston Smith helped hold Austin’s offense in check. During the regular season, the Packers hadn’t scored more than three goals in a game, but they hit their stride in the first round of the playoffs by dropping eight goals on Cannon Falls.

Albert Lea came on strong late in the season as well. But, the Tigers began the season with a series of near misses: a 1-0 home loss against St. Peter, a 3-1 loss at Byron and the overtime home loss to Austin.

After losing to Mankato West and Rochester Century by a combined three goals, the Tigers had amassed a record of 4-8-1.

However, a hot streak at the end of the season, including one-goal wins over Kasson-Mantorville and Mankato East, gave Albert Lea a 6-9-1 overall record headed into section play. The Tigers rode that momentum to a 5-0 win over Stewartville in the first round of the playoffs.

“Toward the end of the year, we fought through all the adversity and all the injuries,” Squires said. “Lots of things didn’t go their way, but they kept working hard.”

Albert Lea finished the season with an overall record of 7-10-1.