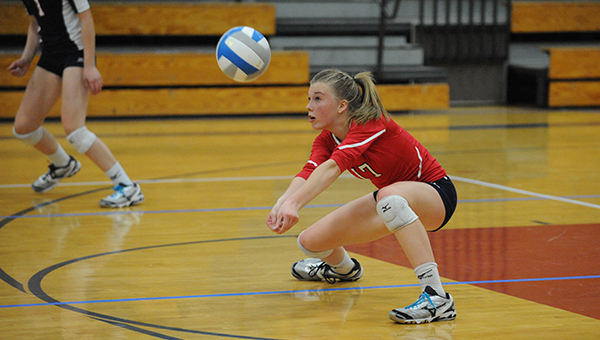 Camryn Keyeski of Albert Lea gets a dig during the Section 1AAA quarterfinals against Farmington Friday in Albert Lea. The Tigers’ season ended with a 3-1 loss. — Micah Bader/Albert Lea Tribune

Albert Lea has same No. of Big Nine wins than the last 4 years combined

The Albert Lea volleyball team’s most successful season since 2006 ended Friday with a 3-1 loss in the Section 1AAA quarterfinals at home against Farmington.

Each game was decided by fewer than five points except Game 2, when Farmington won by six.

“That’s what you’re going to have when both teams are so closely matched,” said Albert Lea head coach Lisa Deyak. “There was never really a moment where one team controlled the match.” 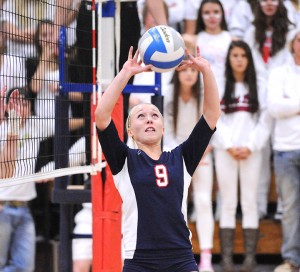 Both teams were 3-2 in their last five matches of the regular season, and the schools share a tiger as their mascot.

The score was tied at 19 in Game 1, but Albert Lea went on a 5-3 run that was capped with Julia Deyak’s game-winning kill as she tipped the ball over the net for a 25-22 win.

In Game 2, Farmington struck back by building a 20-10 lead. However, a kill by Albert Lea’s Kassi Hardies sparked a 8-3 run to cut her team’s deficit in half.

“When I finally got back on target, it felt really good to be out there,” Hardies said. “That was exciting.”

Conflicting with Albert Lea’s plans to extend its lead in the match, Farmington responded with the last two points of the game to win 25-19 and tie the match at one.

Farmington jumped out to another lead (9-4) in Game 3, but Albert Lea cut its deficit to one point (15-14) after two consecutive kills by Annie Ladwig. Moments later, Albert Lea tied the game at 17. Albert Lea took its first lead and pushed it to two points (19-17) with a block by Deyak. However, Farmington ended the game with a 7-3 run to take a 2-1 lead in the match.

Neither team pulled away in Game 4. With the score tied at 20, Deyak gave Albert Lea a one-point advantage with a kill, but that lead was short-lived, because Farmington finished the game and the match with a 5-0 run.

“We had our moments where we made runs, but we just weren’t consistent enough,” coach Deyak said.

Despite an early exit from the postseason — Albert Lea was the No. 4 seed, and Farmington was the No. 5 seed — Albert Lea (15-10 overall, 6-3 Big Nine) finished above .500 for the first time since 2006, when the Tigers were 16-11. Albert Lea’s six conference wins matched the school’s total from the last four years combined.

“We’ve had an amazing season,” coach Deyak said. “It was fun, and we’ve made so much progress over the last few years as a team. We are so much stronger in every aspect of the game, and that’s because the girls worked very, very hard in the offseason. I’m proud of them.”

Woodside, Albert Lea’s senior setter, said the team’s biggest wins of the season were at Mankato West and against Eastview at the Hopkins Tournament.

“We were close as a team,” Woodside said. “Coming to practice every day — it was fun.”