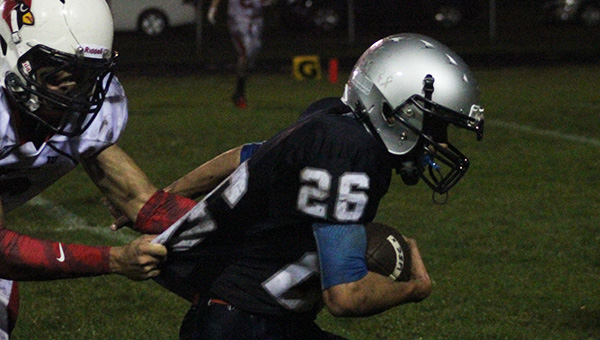 WELLS — The United South Central football team has generously provided extra football to watch over the past three weeks.

The Rebels played in their third straight overtime game on Friday and defeated Bethlehem Academy 24-21 on a stormy night in Wells. 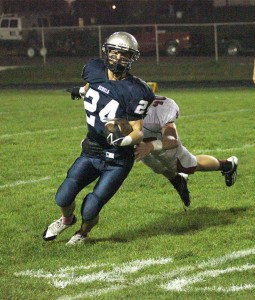 “The kids battled,” USC head coach Brad Huse said. “We were down again, 14-7 at halftime. We made some adjustments.”

Bethlehem Academy got the ball first in overtime and proceeded to miss a field goal, before USC got its shot to win the game from the 10-yard line. The Rebels moved the ball to about the 3-yard-line and faced fourth and goal, which set up a field goal. Senior Tobias Kuschel drilled the game winner through the uprights.

Periods of heavy rain made for sloppy conditions, which led to some sloppy play. USC won the game despite losing the turnover battle. The Rebels threw four interceptions and lost one fumble. Bethlehem Academy lost two fumbles. USC also was burned on a few big plays in the first half.

“They have got some great receivers,” Huse said. “We played soft a little bit better in the secondary (in the second half) and made them run on us.”

When the rain wasn’t falling, USC was able to get their passing attack going. Quarterback Travis Brown completed 12 passes for 173 yards and three touchdowns.

“When the rain stopped and we could pass, we were effective doing that,” Huse said.

The Rebels grabbed the lead with a little more than four minutes left in the fourth quarter but allowed Bethlehem Academy to tie the game about 30 seconds later. The Rebels had four players combine for 121 yards on the ground in the game.

Bethlehem Academy suffered its second loss of the season, and USC (3-3 overall, 3-1 Gopher Valley A) has won three of its last four games. Next, USC plays at Waterville-Elysian-Morristown (1-5 overall, 1-3 Gopher Valley AA) at 7 p.m. Friday.